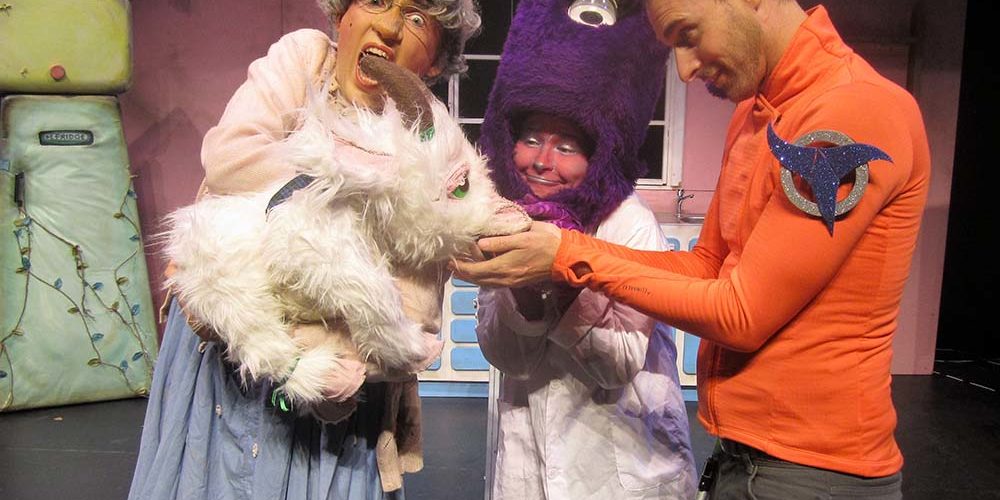 There was an Old Lady who Swallowed a Fly: Review

Carmel Thomason3 min readOctober 24, 2019
Home » Reviews » There was an Old Lady who Swallowed a Fly: Review

As with most children’s books adapted for the stage, the big question is – how can a short picture book be turned into a 70-minute show? Cleverly the People’s Theatre Company don’t try to simply pad out the original. Instead the team creates a whole new intergalactic story that captures the all fun, absurdity and inter-generational appeal of the original with more besides.

Even before the show opens youngsters are captivated by the set – particularly the big Back to the Future type control station to the left – what could it be?

All becomes clear once we meet Nambang (Steven Lee) whose spaceship is fuelled by stories. Immediately he has the young audience hooked. He needs them to help him find stories so that he can get enough fuel to return home. Are they with him? Of course, they are. Almost from the off the audience are in full song to a medley of nursery rhymes including, ‘If You’re Happy and You know It’ and ‘Old McDonald’s Farm’. The more the audience join in the more the old woman in the corner comes to life, until bit by bit we learn more of her story.

Also on board the space-ship is Dr Goosehandle (Lizzie Goodridge) – a purple furry monster who only speaks the weird and wonderful space language. This makes for some hilarious mimicking from the crowd, of clearly made-up jabbering and funny sounds.

There are plenty of laughs too from the old-woman (Stefan Gough wearing a huge false nose and grey permed wig). As the animals she eats get bigger and bigger, the scenes are played out as shadow-puppet animations on the window, as if taking place outside. These short, funny films cleverly inter-twine a series of children’s stories from Puss in Boots to Three Little Pigs – and the young ones love spotting them all.

Writer, Steven Lee has added some pantomime fun with ear-splitting, ‘It’s behind you’ and ‘Oh no it isn’t’ scenes. And he’s also softened some of the more unsavoury parts of the original tale, with comic humour. For example, the dog manages to stay intact inside the old woman causing her to take on the character of man’s best friend.

It’s a fast-paced, interactive and genuinely funny show, suitable for children from very little ones to juniors and their grown-ups. As Zachary Thomason aged 7 says: “It’s brilliant and hilarious. I screamed my voice out for them.”

There was an Old Lady who Swallowed a Fly was at The Lowry, Salford Quays on 24 October 2019. See website for full tour details.