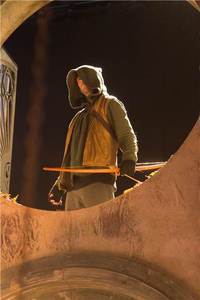 It brings together writer Charles Way, who has a long association of writing family shows for the company, and director Amy Leach and designer Hayley Grindle who brought us last year’s wonderfully inventive adaptation of Arabian Nights, which won a Manchester Theatre Award.

Although not an obvious Christmas story, Robin Hood does have that fairy tale element of brave hero overcoming an evil villain to win his girl, leaving us uplifted with a joyous wedding at the end.

However, while fairy tales have always had a dark streak the feelgood element is always the strongest. In contrast, this production excels in its sinister moments while the other aspects are drawn rather more thinly. The musical content is disappointing and what should be an uplifting finale falls a bit flat. Perhaps as the run goes along the balance will work itself out.

There is one set – a dusty old courtyard – which, although dramatic in its harshness, works better for the gruesome murders, tortures and imprisonment than it does for the vibrant forest life, which is transformed by a projection of trees on the castle walls with thick metal chains, hung from the ceiling, doubling as forest vines.

Emilio Doorgasingh is an impressive and imposing Sheriff of Nottingham, who the adults in the audience never really believe would be overcome by Ciaran Kellgren’s playful, Robin Hood. Perhaps this is the appeal for youngsters. It is like a David and Goliath set-up. The hero is handsome, but slight and he’s also a cheeky Scouser, although I’m not sure why.

In keeping with the season there is some audience participation with actors running through the stalls, and the children enjoyed spotting a shadowy Hood in the various castle windows.

However, the fight scenes, directed by Renny Krupinski, are the undoubted highlight as Hood and his Merry Men battle with staffs, swords, daggers, feet and fists. Even Maid Marian (Amelia Donker) gets in on the action and proves herself to have a firm right hook. If they can add the same punch to the rest of the show, they could have a success.