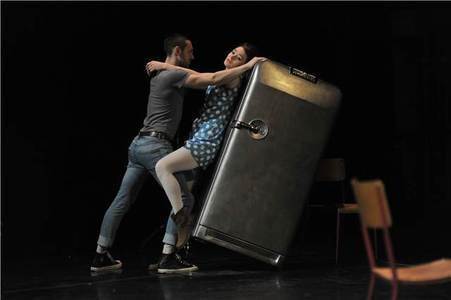 The Chelsea Hotel in New York had a legendary history with a run of guests any five-star hotel would fight over today, although their antics behind closed doors probably less so. In its time it was a hub of artistic talent, housing a stream of musicians, film-makers and writers including Bob Dylan, Patti Smith, Dennis Hopper, Arthur Miller and Mark Twain. Many stories have been told and many more remain untold, but you don’t need to know any of the history to immerse yourself in Earthfall’s homage to this now infamous venue.

The show is literally slow to start with four dancers taking what seems like an age to simply sit down at a table, but once it gets going the performance sucks you in and leaves you at the end feeling not only that you’ve been pulled back to your youth but that you’ve experienced a whole new life along the way.

Couples come and couples go, sweeping us through a whole range of emotions from playful fun, friendship, romantic love, lust, obsession, frustration, despair, anger and violence. The screen is used to dramatic effect to project an overhead view of some of the action or close-ups of the dancers as they tell snatches of stories. The score is an equally evocative mix of gentle folk and deafening punk rock, played by three musicians on drums, keyboard and electric guitar who sit at the side of the stage and sometimes interact with the performers.

In its mix of subject matter, choreography, music, use of technology and sheer strength and skill of the performers, this is a production that really packs a punch. There is a haunting mix of both the familiar and the edgy. It’s an exhilarating experience, which could leave you wired, even when viewed from the outside.