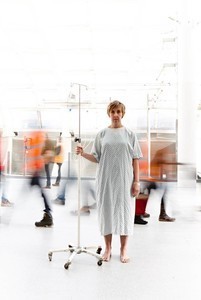 It’s rare to see a spontaneous standing ovation at the Royal Exchange. I think this is partly because the intimacy of the space means the cast can see the audience clearly and those on the banquettes end up almost sharing the stage with the actors. So, when it happens, as an audience member you can feel the rush of energy. In this case it’s a whole mix of emotions from relief to elation, with heaps of respect for lead, Julie Hesmondhalgh.

Here Hesmondhalgh is Vivian Bearing, a university professor who specialises in 17th century poetry. She is a brilliant mind and wit, although much of what she has always known is being taken away from her following a diagnosis of metastatic ovarian cancer. For the length of the play she is dressed in a hospital gown and salmon baseball cap. She has lost hair; she’s drawn, washed-out, and desperately trying to hold-on to some control of her situation. ‘I was a scholar when I had shoes,’ she says. We never see her in shoes and are left in no doubt from the opening how this play will end.

I’m aware that round-up sounds far more depressing than it is when staged, which is probably one reason why this Pulitzer Prize winning play is rarely performed. Another reason is clearly the strength required of the lead actor in every sense – professionally, emotionally, physically and mentally. Many who know Hesmondhalgh as Coronation Street’s Hayley Cropper will be surprised to see her playing an American intellectual. She is both convincing and moving – it is a triumph of a performance.

Vivian’s sharp intellect finds much humour in her situation, and there are plenty of genuine laugh-out-loud moments, even in the moment of diagnosis. I did wonder at one point if it was being played a little too much for laughs, because although I felt the uncomfortable tension of a hospital ward for those not used to it, I wasn’t sure I would feel any deeper emotions towards the character or the play. Suffice to say director Raz Shaw turns it on a sixpence at the end with a glimpse of humanity that can’t fail to move and I’m gone.

The attention to detail in the direction is sometimes difficult to watch because it is so well observed, and likely reflects Shaw’s own cancer journey as well as the strength of the script. In 1995, at the age of 28 he was diagnosed with Stage 4 Non-Hodgkin’s Lymphoma. He has since been given the all clear.

At one point Vivian says: ‘If you think eight months of cancer treatment is tedious for the audience consider how it feels to play my part’. Throughout, Vivian does make us think – not simply about her illness, but about who she is and the passions of her life. You can’t watch her plight without reflecting on your own. It’s a play about death that makes you want to live, and the full house standing at the end were clearly both moved and energised.

Wit is at The Royal Exchange, Manchester from 21 January to 13 February 2016.