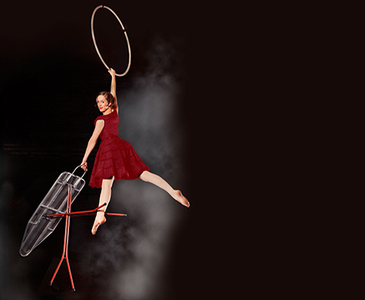 Pirates of the Carabina originally came together in 2011 for a one-off commissioned performance of Flown at Glastonbury Festival. Such was the response, that more than 120 shows later, the circus is still touring worldwide. For three days we were lucky to have it come to Salford Quays, and five years on this gem of a show hasn’t lost any of its vibrancy.

This group of 13 performers stretch the definition of multi-talented to the extent that the whole stage becomes a playground for their imagination. There is a live band playing throughout – an original soundtrack of Celtic rock that is itself enchanting. Performers deftly switch between playing the drums and walking the tightrope. They are musicians, singers, aerialists, acrobats, clown and storytellers. Each performer has his or her own story to tell, in the form of short monologues, giving the audience what feels like an intimate insight into the life of a 21st century circus performer.

Here, there are no magic tricks, what we see is the strength, flexibility and beauty of the human body. As if to emphasise this the troupe play around with everyday household objects like a standard lamp and an ironing board. It is at once ordinary and extraordinary, wacky and real.

As with all circuses, some of the acts are undeniably jaw-dropping and are made to look far easier than they are. There is a lot of humour thrown in too as the clown rides on in a chariot pulled by a Barbie-sized, toy horse. The same clown then jokes as he twirls at height on the cordelisse. You feel like almost anything could happen in the best possible way. Everything flies, both literally and metaphorically. The result is freeing and life-affirming, with an unforgettable swinging finale.