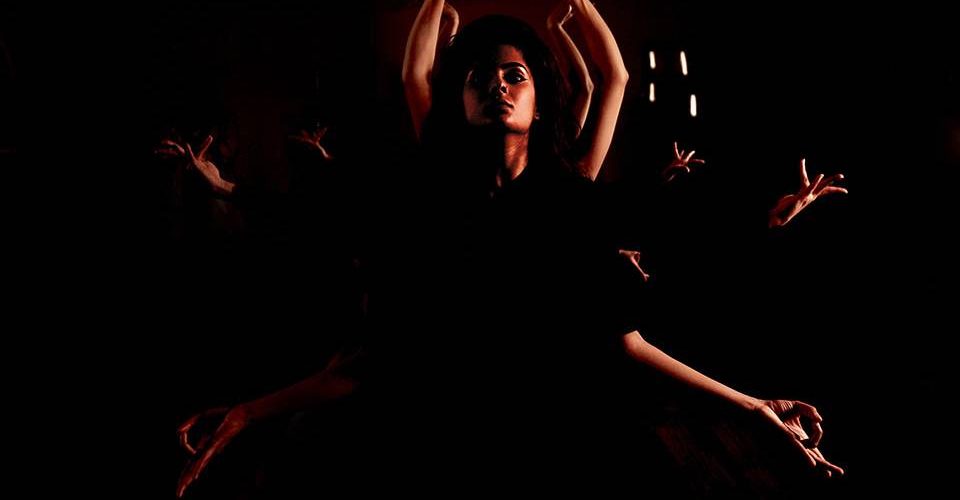 In the first short piece, Devi, Subhash choreographs 8 female dancers from Pushpanjali Dance Company in a six-minute dance that opens with an almost snake-like unity of movement, before the dancers separate to strong drum beats displaying powerful martial arts movements, uniting again at the end in a liquidity of movement.

Subhash performs the second piece, Priye Charusheele, as a solo. Choreographed by Chitraleka Bolar it is a dance of flirtation, demanding Subhash’s acting and personality to draw in the audience through mime as much as dance. Here his presence is light and playful, evoking images of nature and longing.

Following the interval, the mood darkens with a ghostly piece, EKA choreographed by Subhash for three female dancers. It feels like it could have been inspired by the witches of Macbeth, as the dancers, dressed in grey draped costumes and shrouded in low-lighting, whisper and circle each other in a ritual-like way. Again, there are elements of martial arts to the movement and the effect is disturbing as if watching a group-induced madness.

The final piece, Fly, sees Subhash return as a solo performer in a 25-minute dance that morphs styles into an experience that feels more akin to performance art. Two drip bags hang from the ceiling, under each of which Subhash places a drum. Following a jaunty upbeat mime to Simon and Garfunkel’s Sound of Silence, these drips form the basis of a beat through which Subhash struggles to break free from his suited-self and the ties that bind him to the physical world. Choreographed by Saju Hari, it makes full use of Subhash’s interactive play with the audience through mime, as well as his controlled movement, at times contortionist, at others jerky, before moving towards more fluidity expressing freedom and joy.

In the intimate space of The Lowry’s Studio Theatre the audience can clearly see each twist and turn of the dancers, the way their muscles contort and the beads of sweat as they fall. When Subhash shakes and shivers he is so close we feel his chill and when he leaps we sense his joy. The effect is dazzling.

Woven by Morph Dance Company was at The Lowry, Salford Quays on 24 April 2019.

Read our interviews with choreographers David Bintley and Matthew Bourne.