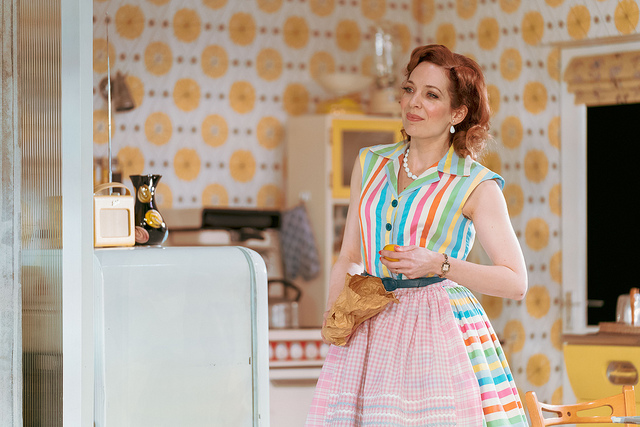 Home, I’m Darling arrives at the Lowry fresh from its Best New Comedy win at this year’s Olivier Awards. Not that it needs any formal accolades to put bums on seats. Laura Wade’s new play was managing to do that nicely already, with sell-out runs at Theatr Clwyd where it began, then the National Theatre (who co-produced) and later the West End.

Although there have been some cast changes along the way it comes with its main star attraction, Katherine Parkinson (well-known from her TV roles in The IT Crowd and Humans) who leads a terrific cast with all the grace and precision of Judy, the 50s housewife she’s created.

But as the inverted title suggests, nothing is quite as it seems in Judy’s world of domestic bliss. The show opens on a scene straight from a mid-20th century domestic sit-com. Anna Fleischle’s detailed double-tiered set brings the full-house into view. From the sunshine yellow kitchen to the pink flamingo bathroom, everything is bright and breezy. Looking a pretty picture wearing a full circle skirt and perfectly pinned hair, Judy sits at her trendy formica kitchen table before lifting the lid on her Apple Mac, and on the whole fantasy of living a 50s life in the 21st century.

Judy, it’s slowly revealed, is a confused mix of contradictions. At one level she strives to be an authentic 50s housewife for estate-agent husband, Johnny (Jo Stone-Fewings), fetching his slippers as he arrives home from work, while making sure there is a hot dinner waiting in the oven.

Judy cleans her already spotless house with a carpet sweeper, feather duster, a bit of lemon juice and vinegar. She battles on with an original 50s fridge loudly humming away as it struggles to keep pace and serves her guests nibbles of devilled eggs and cheese straws. Meanwhile all these things, including her vintage dresses, are sourced from shopping on the web.

The contrast of worlds is brought into more stark contrast as we’re introduced to the couple’s friends, Fran (Siubhan Harrison) and Marcus (Hywel Morgan) who like the clothes and dancing of the decade but that’s as far as it goes. Judy’s feminist mother Sylvia (a feisty show-stopper of a performance from Susan Brown), who is horrified her educated daughter would willingly give up a career, and Jo’s boss, Alex (Sara Gregory) who is simply bemused by it all.

It sounds topsy-turvy and much of it is. But what makes it work so effectively as a comedy are the well-observed moments that capture not only Judy’s insecurities, but those of a generation of women. While Judy turns to the 1949 classic, ‘How to run your home without help’ for advice on cleaning, millions more are reaching for the much lauded KonMarie method of tidying.

As Judy’s mum reminds her, she is nostalgic for a life she never knew. At the same time joker Marcus reminds us #MeToo is not simply an issue of the past but is happening now. In the laughter, Laura Wade creates a world that is unusually both thought-provoking and escapist. For all our 21st century advances we still haven’t mastered the ability to turn back time, even if we wanted to. And we’re left wondering if our strange, fantasist heroine is really so different from the rest of us in wanting her world a bit calmer, cleaner and a little less real.

For struggling home-makers everywhere, it’s a must see.

The National Theatre and Theatr Clwyd’s co-production of Home, I’m Darling is at The Lowry from 23-27 April 2019.

Read our interview with Katherine Parkinson.