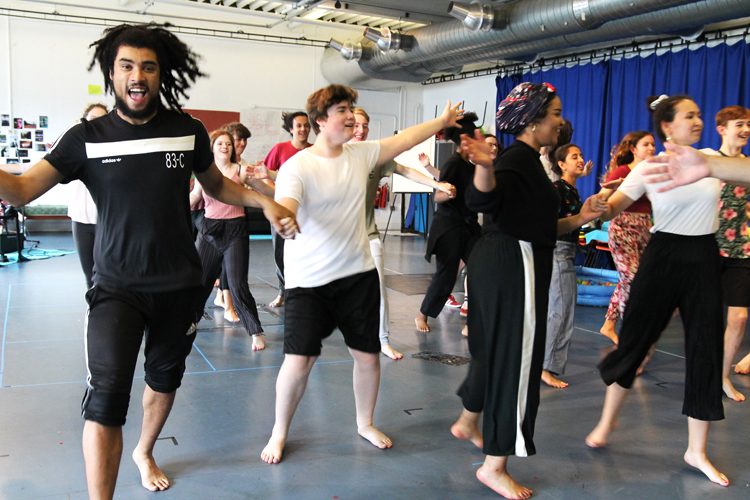 The Tempest at Abraham Moss School

School’s out for summer. The school should be empty. A desolate prison. No more rules. But wait, what’s that on the CCTV? A person, a spirit, a mystical creation? Something strange is happening at Abraham Moss School. Rules are broken, souls are bared and can you ever really forgive?

This summer, the Royal Exchange Theatre’s Young Company is staging a promenade production of Shakespeare’s The Tempest at Abraham Moss School in Crumpsall.

The comedy provides an accessible introduction to Shakespeare’s works for teens. It is performed solely by young people aged 15-25 who take the audience on a strange and mystical journey through the deserted corridors of Abraham Moss as they search for the truth hiding in this school. And although light-hearted on the surface, it’s themes of betrayal, magic and revenge explore deeper issues of freedom, power and forgiveness.

It’s Shakespeare, but not as you know him, and director Nickie Miles-Wildin is enjoying the challenge the school setting brings. “School means so many things to everyone – it’s where we grow, find out who our friends are and who we really are,” she says. “The end of it can feel liberating, bewildering, like the end of the world. The Tempest allows us to explore all those things in a magical mischievous setting.”

Nickie’s own version of Miranda was seen at the opening ceremony of the London 2012 Paralympics opposite Ian McKellen’s Prospero. Nickie is the Royal Exchange’s resident RTYDS director (Regional Theatre Young Director Scheme) and this production is her directorial debut for the company. She is a strong advocate of accessible theatre and the performances feature integrated BSL and creative captioning throughout.

‘This is really exciting for me as a director,” she adds. “I’m excited to share with audiences how we use the deserted school to tell our story. Shakespeare meets Stranger Things meets the Royal Exchange Young Company”.