Pride in Trafford is a new five-day event featuring music, comedy, cabaret, film and community events celebrating and exploring LGBTQ+ culture and identity across the region. We caught up with Waterside Arts Centre manager, Darren Adams to find out what’s in store.

Pride in Trafford is a new initiative for 2019, what was the idea behind it?

Late in 2018, we held some really important activity in Trafford around the 30th World AIDS Day which ran alongside our theatre commission with Queer artist and activist, Nathaniel Hall. This started a conversation with the Mayor of Trafford, who asked us to curate a programme of work to celebrate Pride in Trafford. LGBT advisor to the Mayor of Manchester, Carl Austin has been working with all 10 GM boroughs to, amongst other initiatives, encourage each to host their own Pride event.

We really wanted to focus on reflecting the diversity of Trafford and presenting some exciting yet meaningful events. We also wanted to find ways to explore and celebrate identity as well as LGBTQ+ life.

As a cultural venue, we could focus on presenting artistic work that is often under-represented, whilst working with artists in their development. This is something we do year round, whilst presenting high quality work for our audiences.

Why do you think it’s important for the borough to have its own LGBTQ+ festival, separate from Manchester Pride?

Manchester Pride is one of the most internationally recognised LGBT events and we are very lucky to have this to put a spotlight on Manchester from across the world.

At a local level we have been able to curate a programme that is reflective of our communities and residents in Trafford and tie back to the work we do here at Waterside. By holding events outside of the city centre, this raises awareness, educates and encourages participation for many who may not wish to attend larger scale events. We’ve found a real sense of ownership within the community in helping us create the festival programme.

Manchester Pride have been supporting the development of grassroots and local pride events across Greater Manchester.

What is Waterside’s role in Pride in Trafford?

Waterside will be the hub of all activity, and has collaborated with local partners, such as Creative Industries Trafford (who focus on artist development in Trafford), Proud Trust (who work with young LGBTQ+ people), LGBT Foundation and Contact Manchester.

Why did you choose artist Dario Darnell, aka Youngr as the headline act?

Youngr is a really exciting artist. Whilst travelling the world performing his music, he actually grew up in Trafford, so has really strong routes to the borough having lived in Urmston and Sale.

He has also been an avid supporter of LGBT events, and has previously performed at Manchester Pride Festival (and is doing so again this year).  We’re so delighted to have his support as we launch Pride in Trafford.

What can people expect from his show?

He is just a phenomenal performer, the energy and charisma is electric. Youngr fuses live performance and DJ’ing to deliver the most spectacular music sets.

Audiences will also get the chance to see a really exciting, breakthrough artist Benedict Cork, who will be supporting Youngr.

What is happening at the community hub and how can people get involved?

We’ll have host of local groups and organisations exhibiting during the day, with additional activity such as rapid HIV testing by LGBT Foundation; Queer on Screen panel debate about LGBTQ+ and PoC representation on screen and in literature; there’s a Pride Bike Ride taking place around Trafford and then evening performances by the phenomenal Cocoa Butter Club, Youngr and Benedict Cork. It’s a packed day!

We’re opening our doors and hoping lots of people will come down to chat to the exhibitors, join in with one of the events or debates, grab a coffee or take some time to find out their HIV status.

Pride in Trafford coincides with IDAHOBIT (International Day Against Homophobia, Biphobia and Transphobia.) How would you encourage people to best celebrate this?

To mark the occasion, the Mayor of Trafford, Cllr Tom Ross will be raising the IDAHOBIT flag at Sale Town Hall and he will be joined by a local school choir who will be singing for us. This is a low-key, yet hugely important part of the Pride in Trafford programme.

Whilst is important to celebrate the day and achievements we as a community have made, we must also use the opportunity to raise awareness and challenge stigma.

We still have work to do as a community, where those in particular who identify as bi, trans or are living with HIV still face unacceptable discrimination. For me personally, it is also a time to reflect upon those countries where LGBTQ+ people do not have equal rights and the endure the abhorrent treatment we hear about on a daily basis.

The LGBTQ+ community is strong and resilient and we must continue to fight for equality worldwide.

How do you envision the future for Pride in Trafford as a festival?

We are so proud of the festival we have developed for 2019. The Mayor of Trafford, Cllr Tom Ross has been instrumental in bringing the festival to life.

We’ve had a remarkable response to what we are doing and are committed to growing the festival year on year, cementing this as an annual event; by giving further opportunity for our communities in Trafford to get involved, a platform to share their stories, celebrate their identity and use this a tool to really effect change.

Pride in Trafford runs from 15-19 May 2019 at Waterside in Sale. For details visit prideintrafford.org

Find out what’s coming up at Cheshire Fest 2019. 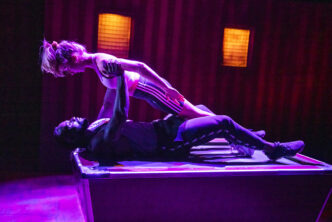