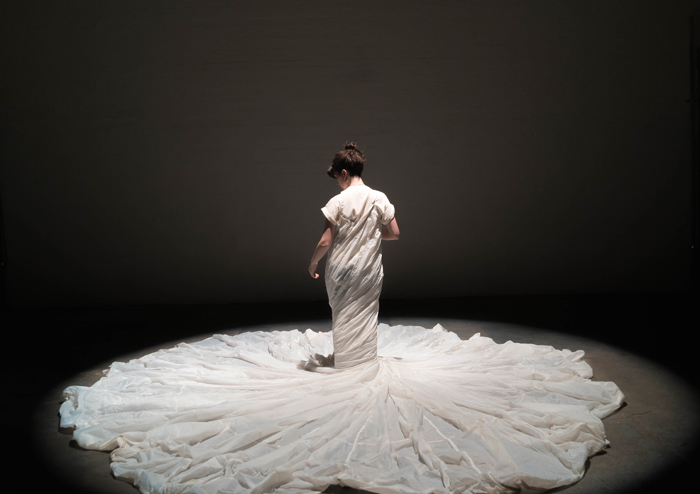 She talks to Quays Life about her personal response to the Nanjing Massacre of 1937 and the challenge of keeping our humanity while living alongside other human beings.

What is the show about?

Jude: “The show’s about a lot of things. Its starting point is the 1937 Japanese invasion of China, and particular a notoriously brutal massacre known as the Rape of Nanking, but that event leads into stories and questions about national identity, family, memorial, pacifism, the things we choose to remember and the things we choose to fight for”.

What is your personal connection to Nanjing?

Jude: “I’m half-Chinese but I grew up in England, and until my mid-20s I knew nothing about the Rape of Nanking, or anything else that happened in that part of the world in World War Two. So, I instantly felt a personal curiosity and connection to the events in Nanjing (Nanking is the old English version of the city’s name), because it felt like uncovering a huge part of what it means to be Chinese that I hadn’t known existed”.

The play includes global testimonies and personal accounts – what impact did working with true events from people’s lives have on your writing?

Jude: “I felt a huge sense of responsibility to bring people’s words to life, and also not to misrepresent them. I also found it fascinating and challenging – no one’s actions and morality are black and white”.

What did you learn from other people’s stories about the human impulse to seek revenge?

Jude: “Over and over again, I found my desire to avoid violence was coming up against a visceral reaction to the things I was reading or hearing about. It’s very difficult to judge people who have acted violently when they feel it was self-defence, or even a deserved punishment, because it’s very easy to spot the impulse in your own reactions to things. Overall, I think I learned how hard it is to be human, and live happily alongside other humans”.

You have written and are performing in the play. What did it feel like to hand over the director reins?

Jude: “There were things I knew I wanted out of the production – that I wanted it to feel like a real conversation, not a constructed performance. It was scary and hard to hand over the reins but Elayce and I have worked really closely together and she’s brilliant – she knows when to give me room to explore, and when to kick me up the arse”.

Why is there a 14+ guidance rating? What can audiences expect?

Jude: “The overall tone of the play is deliberately gentle and calm, but I describe some quite violent and upsetting things in quite a lot of detail – which of course is not pleasant for anyone, but it made the show feel inappropriate for children. Some of the material is quite harrowing. But I think there is hope and positivity in it, and maybe even a few moments that will make people laugh”.

What do you hope people will take from the show?

Jude: “It’s not intended to preach. I wanted to ask people the same questions I’ve been asking myself for years about the things I’ve learned. And I wanted to make space for contemplation, and personal reflection. I’m also giving a comprehensive list of all the best food to eat in Malaysia, so I hope people will take that away too!”

Violinist Jordan Brooks on taking the next steps in professional performance