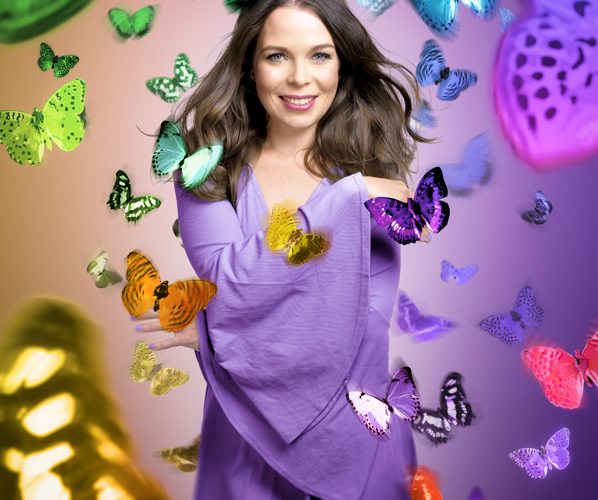 Juliette Burton dares you to be kind

Following a sell-out Edinburgh Fringe, comedienne, Juliette Burton comes to The Lowry with her new show, ‘Butterfly Effect’ which explores how small acts of kindness can have big effects. She talks to Quays Life about mental health, chaos theory and spreading a Mexican wave of kindness across the country.

Tell us a bit about your show
It’s a comedy show about kindness. Last year I had a bit of a tough time. Lots of stuff happened in my life I felt I had no power over. So, I decided to focus on the one power we all have which is how kind we are to people. So, I did random acts of kindness to see if they had any effect. Pretty soon, I found out it’s not all that easy being kind!

It’s a silly, fun, goofy, joyful quest to make the world a better place. It’s raising money for the mental health charity Mind. I do talk about my own mental health conditions in the show, because I believe passionately comedy has the power to break down barriers and increase understanding: if we’re laughing together, we feel less alone.

The show has sold out every single day at the Edinburgh Fringe this year and last year, following on from another two years previously of other sold out shows of mine. It won awards in 2017 at the Edinburgh Fringe. And it’s a show I have a lot of fun with. If you’re a fan of silliness, positivity, feminism, naughtiness, cheekiness, intelligent humour and you, like me, have a determination to make the world a better place you’ll have a ball!

Where does the title of your show, ‘Butterfly Effect’ come from?
I called the show ‘Butterfly Effect’ because in science Butterfly Effect is a part of chaos theory. Just like a butterfly flapping its wings on one side of the world might cause a ripple effect which eventually causes a tsunami on the other side of the world, one small act of kindness might have huge effects we just don’t know about. If you come to see it you’ll understand why I personify chaos and this show is my theory.

We each have huge power with a single act of kindness, we just don’t know it.

Plus butterflies are pretty cool – they symbolise transformation which is close to my heart. And on this tour I’ll be flying about all over the place!

How did you become interested in kindness?
My mother always taught me kindness is a strength. She and her sister, my aunt, were the kindest people I knew. I always tried to be kind but worried it might be seen as a weakness. Sometimes I worried empathy might mean I was taken advantage of.

Some people seem to think kindness is a weakness. In the political landscape we’re living in there’s a lot of “them and us” attitudes: old vs young, left vs right, strange vs familiar. I want to unite people, not divide. And kindness can do that. There’s no such thing as “them vs us”. We’re all just “us”.

I’ve struggled with mental illness in my life. I’ve been in hospital five times and sectioned under the mental health act. When I’ve felt like all is lost and I can’t do life, one small smile from a stranger is a lifeline. It gives me hope. One experience of mine when I was in hospital, detailed in the tour version of the show, meant I discovered the meaning of life is “be kind”. Come see the show to find out more.

What does kindness mean to you?
Kindness gives my life meaning. A small kind gesture can be life-saving. I once chatted to a man at the Edinburgh Fringe Festival in a kind way, meaning instead of chatting to him like a stranger I talked to him like he was the only person who mattered to me in that moment, which is true, he was. He came to see my show the next day. He came back to see my show a year later. That second time we met, he told me the first day we chatted he’d been planning on committing suicide. He’d been going through a lot I didn’t know anything about. He said the way I talked with him felt like the first act of kindness anyone had shown him in a really long time. He then said he “felt obligated to see the show”. That’s his words, not mine! Then he said he found my show so uplifting he changed his mind. That’s the most amazing feeling – knowing that small act of kindness had such a huge effect. Imagine how much of an effect all those other small acts of kindness we all do each day might have.

He and I are still friends. He’s one of the most wonderful people I’ve ever met, my world is better for having him in it.

Do you think kindness is under-rated?
Yes. It’s easy to dismiss kindness as a weakness but it isn’t, it takes strength. Whenever I’ve felt the most alone, when I’ve struggled the most, kindness has kept me connected. A small smile from a stranger or a kind word or a kind gesture has renewed my faith in humanity.

Has your view of kindness changed through doing the show?
Doing the show has meant I’ve been invited to question and re-examine my idea of kindness and what it is, my motives for being kind. But ultimately, I think motivation doesn’t even matter. An act of kindness, whatever the reason for it, can still be a positive force in the world.

I have realised being kind to myself is important. That’s something I’m not very good at. It’s much more natural for me to be a bit of a bully to myself. But especially on tour or at a festival like the Edinburgh Fringe where I’m performing every day, I need to make sure I look after myself, to mean I can give the best show possible to my audiences.

Ultimately, as saccharine as it might sound, my audiences are everything. All the lovely reviews and awards mean nothing without an awesome audience there with whom I can share the show.

You use the hashtag #DareToBe kind. What do you think is daring about being kind?
Sometimes it’s scary trying to do something kind. You put yourself out there, vulnerable, giving a stranger a compliment or a smile, you leave yourself open to being rejected or left hanging. But that’s ok. Because you’re still part of the kindness revolution. It takes courage to be kind.

In the show I ask my audiences to write ideas for ways you can be kind to someone on a piece of paper you’re given going into the show. You are then daring audiences at future shows to do that random act of kindness. You’re giving them inspiration and a DARE to be kind. I want people to let me know how they get on, get in touch with me, get in touch with each other to say “I did this dare, this is how great it was or scary or exciting”. I want to see evidence of kindness in the world and I want to share it with my followers. Let’s get this Mexican wave of kindness going across the country – from city to city, town to town, let’s prove the power small acts of kindness can have and let’s connect strangers who might just become friends.

What is the link for you between kindness and comedy?
Laughing at someone’s joke is a kind thing to do. But making someone laugh is also kind. Comedy used to rely on the “them vs us” mentality. But in my shows, my audience are my heroes. They’re my new best friends. I know when I see a show I’m laughing at I feel like I can take on life with more strength. That’s an empowerment the comic has given me. That’s what I hope to do in my shows.

What’s the kindest thing someone has done for you while you’ve been on tour?
Laughing loudly at my jokes is very kind, not being afraid to sit in my (very safe) front row and then there are the people who give me notepads (I mention in my show I’m constantly running out of them). There’s also those people who really get involved with the #DareToBeKind ideas – like the person who in Edinburgh in August was dared to send a goat to a family via Oxfam. They sent me the card to prove they did so. Anyone who gives themselves to the idea like that is my hero.

What small act of kindness have you done today?
There’s countless opportunities to choose kindness over coldness every day. I’ve thanked the bus driver, chatted to staff in bars, seen fellow humans rather than people to fear and I’m about to go give myself a rest after answering all these questions! So that’s a kind act towards myself. I can’t wait to bring the thousands of ideas of ways we can all be kinder to others with me on tour to spread across the UK. Be kind to yourself, book tickets now then come join me.