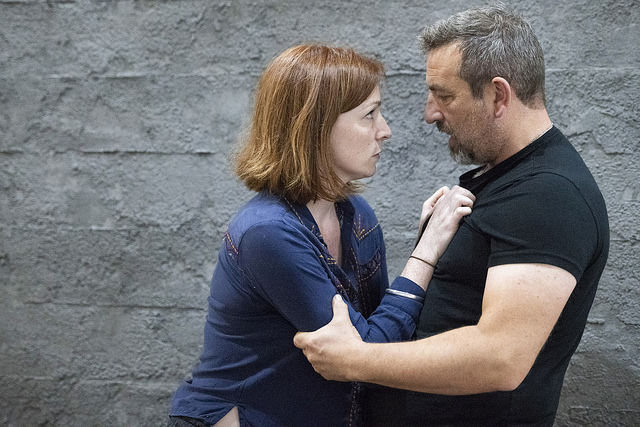 National Theatre Artistic Director, Rufus Norris on creating a Macbeth for our times

Following a sell-out London run, the National Theatre’s radical reinterpretation of Macbeth goes on tour, arriving at the Lowry on 29 September 2018.

Artistic director, Rufus Norris talks to Quays Life about anarchy, uncertainty and why the heart of this classic Shakespearean tragedy resonates more than ever today.

What can audiences expect from this production of Macbeth?

It’s in a modern setting. It’s set in Scotland, but it’s Scotland in perhaps five- or six-years’ time after a long civil war, where there’s been a complete breakdown of everything we take for granted in society. So all the things that were true of Shakespeare’s Macbeth – set in 11th century Scotland in times of warfare like lack of trust, rebellion, survival – are still very much at the centre of the play, but put into a context that is a bit more resonant for now.

What was the decision behind that?

Because the play is on the curriculum of so many schools it felt very important to us that young people seeing the play possibly for the first time get the text, they get what Shakespeare wrote, but that they’re seeing it in a context which feels like it has some relevance to them.

Can you elaborate on that a little?

Most people now have access to huge amounts of information, which includes what’s happening in the rest of the world. With many young people if you ask ‘What’s going on in Syria?’ they could tell you or if you ask ‘What is causing the refugee crisis?’ they’d have an idea. They’ll have a sense of what’s happening in Libya, the Balkan crisis, Afghanistan, the Congo, even the ‘Jungle’ in Calais – it’s no big distance away and yet it’s a world of plastic and survival and fiefdoms and alliances being made. Probably more than ever, young people understand the current poverty of leadership that’s going on and the nature of power. They will all have an opinion about Donald Trump, Nigel Farage, Boris Johnson or Theresa May. So seeing leaders having to make difficult choices under pressure in this play will hopefully make them feel it has a little more to do with the world they’re living in and certainly the world many other people are living in not that far away from here.

What challenges does Macbeth present to you as a director?

One of the challenges it presents is the fact it’s extraordinarily well-known, which means we as audiences and artists bring a lot of baggage to it that you have to clear out of the way. You have to really dig into the script: ‘What is Shakespeare saying here?’ So we’ve had a lot of support, from one academic in particular, Paul Prescott, who has been very helpful. Really understanding the text helps clear away some of that baggage. The witches and the metaphysical aspects of the play are a particular challenge. There are superstitions that people will understand now but our Christian theology, which has been sitting over so much of the way we have built our morality or how we understand the world over the last few hundred years, didn’t really exist in the time of the Macbeths in 11th century in Scotland. There are references to God in the play, but not very many. Macduff talks about God, the Doctor talks about God, but that’s about it. In the broader sense, it’s about trying to find a context for the metaphysical aspects which isn’t too ‘stereotypical-spooky-witch’.

How have you achieved that?

Probably the biggest liberty we’ve taken with the script is to cut quite a lot of what the witches say. One reason is that in the original – or what we’re told is the original because who really knows what the original is? – it’s generally agreed that quite a lot of the witches’ stuff was not written by Shakespeare at all, it was written by Middleton. Beyond that you’ve got to bear in mind that James I had just written a book about witches and the damning of them in a way that can only be described as ‘Protestant misogyny’ following the reign of Elizabeth I. So the idea of these three gnarly old women stirring the cauldron doesn’t feel to me like it says much about our society now. But the idea that nature – in some ways what the witches in this production represent – is in some way giving us our just desserts, does.

Why did you want to tackle Macbeth in particular now?

This is a period where there are no world wars and there have been no world wars for a while. But the number of civil wars that are going on all over the world I don’t think has ever been greater, with societies turning in on themselves and our own society turning in on itself. What the Brexit debate has laid bare is our propensity to attack each other, and with the rise of social media and the power of anonymity that comes with that – allowing people to indulge in hate speech or whatever you want to call it – we’re coming closer to the potential for anarchy. It’s also interesting, I think, to look at leaders with humanity, to look at the challenges they’re under, the isolation of that and the loneliness that can come with it. I think the primary purpose of any storytelling is to invite the audience to stand in the shoes of the people that they’re watching to increase our understanding of humanity and other people’s circumstances. Right now I don’t see a lot of that going on in debate, so I think it’s a very pertinent play in that way.

Revisiting the production for the UK & Ireland tour, are you discovering new things?

Absolutely, yes. One simple physical thing is that we’ve gone from a Greek theatre to proscenium arch theatres and that does change what you can do visually. Also, we’ve recast it. Every actor brings a different intelligence and a different perspective, such as the difference between Rory Kinnear and Michael Nardone. Rory is an incredible intellect, a great thinker, and he can illuminate thoughts fantastically. Michael comes from a much rougher background so he’s much more of a warrior in many ways and he’s Scottish so there’s a sort of integrity and authenticity that he brings to it which is completely different. Consequently, different things are illuminated and as a director it’s fantastic because if your antennae are alert to the fact that your Macbeth and Lady Macbeth will take it in a certain direction then your Macduff will be this kind of man. You pull the scene around depending on what you’re discovering. The major mise-en-scène doesn’t alter much because obviously that has to be planned beforehand, but that’s normal for any play whether you’re doing the first or tenth version.

What do you see as the importance of taking plays around the country?

For one we’re a National Theatre and we have to remember that. The subsidy that we get, and which we’re very privileged to get, enables us to do many things and to contribute significantly to the creative industries, which in turn contribute massively to the economy of the country and the health of our culture. That has to be nationwide; it can’t just be this island in the middle of London. London is populated by people who come from all over the country but the subsidy we get should be used to deliver work to the area we’re paid to cover, the whole country and not just the South Bank.

Obviously we have to have a base and it’s where our work starts, then there are different ways of delivering the show out to the people. It’s a complete no-brainer; as soon as we decided to do the play we knew we’d do a show, then a touring version which will run for much longer than it did in London, and appropriately so. Theatres are community centres and to just put on work in London is the epitome of inequality of opportunity.

Any kind of radical reinterpretation is going to have some detractors but do you welcome the debate they create?

Debate is always good. It’s no secret that this production was given a bit of a kicking by some quarters when we opened it in London, though it was not by the audience. There are many reasons why that may have happened and the tour gives us an opportunity to address some of them. I never like it when people hate the work. You want to engage them, but debate is great. The whole point of telling stories is to get people communicating with each other. What we’ve discovered with NT Live is that it’s often about the relationship between the audience and the audience, not the audience and the actor – that the debates between cinemagoers can be as vibrant as they are in the theatre. It’s great when something encourages discussion. I hope that many young people will come and see the tour and take it back to their friends or their classrooms to debate with their teachers the rights and wrongs of the choices we’ve made. It all enhances their understanding of what a great piece of work Macbeth is.

A lot of young people already saw it at the National Theatre. What were you most pleased or impressed by about their reaction to it?

There’s an old cliché which goes ‘Eyes on stalks, not bums on seats’ and what I was most keen to see was that they were reacting to it. They were engaged and felt like it spoke to them. That absolutely played out as I’d hoped. They were deeply engaged with it as we found from the feedback we received. Sometimes I’d go and sit at the back of the circle or wander around during the interval and listen to what they were saying and it was great to hear them arguing about this, that and the other, not just chatting or getting their mobile phones out. They were fully engaged with what they were seeing; they were getting it, they were receiving it. They were understanding that this is for them and about them, and about the world they’re living in.

The National Theatre’s Macbeth is at The Lowry, Salford Quays from 29 September to 6 October 2018.