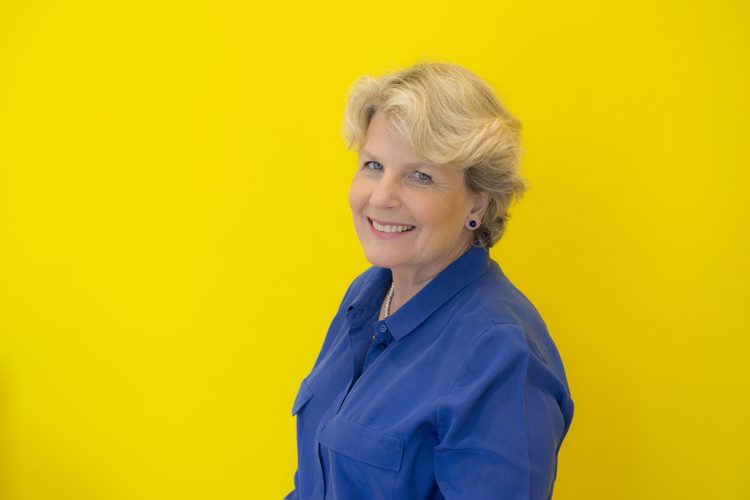 Great British Bake Off and QI presenter, Sandi Toksvig is starting off the New Year with a new live tour, National Trevor. Ahead of the opening at The Lowry, the comedian and writer talks to Quays Life about celebrity, unpredictable live audiences, and being much younger, thinner and taller in the flesh.

Sandi Toksvig is remembering a terrific occasion at the Festival Hall in London 4 years ago. “My wife and I renewed our wedding vows on the stage. It was a small gathering, a few family – and a thousand of my close friends. It was held on the day that same sex marriages were made legal.

“It was astonishing, you know. I invited 150 family and friends, and let it be known to the general public that if anybody wanted to come, they were most welcome. The hall was full. There were literally thousands of people. It was every kind of person you could possibly imagine. It was very jolly. The only drawback was that there wasn’t enough cake!”

This story tells you everything about the presenter’s popularity. She’s the sort of approachable, lovable figure everyone considers their friend. In person, Sandi is every bit as delightful as you would hope. Offscreen, she is just as warm, witty, welcoming and generally wonderful as she is on screen. She is marvellous company, and an hour with her simply flies by.‎

Over a burger in a central London hotel, Sandi is brimming with excitement about the forthcoming tour, ‘National Trevor’ which kicks off at The Lowry in Salford on Wednesday 9 January.

After a spell making such hugely popular TV shows as The Great British Bake Off and QI, Sandi can’t wait to come face-to-face with her audience again in a show that will feature a Q&A and lots and lots of excellent jokes.

In addition, Sandi will be regaling audiences with a raft of funny facts.”I’m endlessly interested in things,” confirms the 60-year-old. “I think detail is terribly funny. Did you know that the glue on Israeli postage stamps is Kosher?”

“National Trevor” also showcases a general knowledge quiz. “I don’t know if you want to win it,” Sandi smiles, “because then you have to come up on stage and talk to me all about your life!”‎

During the show, Sandi invites the audience to help her conduct a piece of music, too. “I get them to conduct Beethoven’s Ode to Joy. I chose that piece because Beethoven was deaf by the time he completed it.

“It’s remarkable to want to create music when you can’t hear it. On the night of the premiere, he was seen running through the streets shouting, ‘Grab life by the throat!’ That’s what I’m saying in this show.”

Sandi adds that, “Whenever I see people wearing a T-shirt that says,’ Living the Dream,’ ‎I think, ‘You’re totally not.’ I want to tell them, ‘If you had to buy a T-shirt saying that, it’s not working’.”

The aspect of the tour Sandi is most looking forward to is the audience interaction. She adores the spontaneity of it all. “I can’t wait to get out there. The best bit is not me talking to them – it’s them talking to me. Me talking? Not so interesting. Them talking? Very interesting!

“You never quite know what is going to happen.‎ The unexpected stuff is always the most enjoyable part. The most unexpected thing that ever happened in a show took place during a Q and A in Bradford. A woman asked me what my bra size was. I couldn’t remember, so she had to come up on stage and have a look!”

A woman asked me what my bra size was. I couldn’t remember, so she had to come up on stage and have a look!”

Sandi, who was a very popular host of Radio 4’s News Quiz for a decade, proceeds to underscore her love of live performance. ‎”The other reason to do a live show is that there is still something magical about sharing an evening out at the theatre.

“When actors stand backstage before a performance, we listen to the sound of the audience. We say, ‘They’re a bit Monday night’ or ‘They’re a bit Saturday matinee’. A distinct personality overtakes an entire group of people.”

The theatre also demands a focus that we sometimes lack in other parts of our life. “It’s about getting people to put their phones away, have an engagement with the show and listen to other people laughing – hopefully – or weeping!

“For a brief moment we can forget about Brexit or whatever it is we’re worrying about and lose ourselves in the show. That’s good for us. We feel better.”

One of the main themes of “National Trevor” is our current fixation with celebrity. Sandi explains that, “The thing I’m slightly obsessed with is our whole attitude to fame. ‎There is a new trend of calling people a ‘National Treasure’.

“I don’t know where it’s come from, but I heartily disapprove. I think everybody has something to commend them. Everyone has a story where you go, ‘Really?’ We don’t get to hear their stories of extraordinary endeavours.”

Sandi proceeds to outline where the show’s title comes from. “One day, a friend of mine was being extremely rude to me‎. A lot of my friends are – I encourage it! So in the middle of this argument, I said to her, ‘Don’t you know I’m a National Treasure?’

“And she replied, ‘You’re a National Trevor?’ Then her husband said, ‘Who’s been calling her Trevor?’ Now they call me Trevor. So that’s why I gave the show this title. I’m going round the country looking for all the National Trevors. I’m celebrating people.”

Sandi muses on what she hopes audiences will take away from “National Trevor.” “I hope they think that they have had a really good evening, that they’re had a great laugh and that I’m much younger, taller and thinner in the flesh!”

Before she has to go off to another gig, Sandi decides to order an alcohol-free cocktail to clear her throat. It’s called, “Endless Joy.”

Quick as a flash, Sandi jokes: “That should be the title of my next live show.”

Well, I’d go and see that, wouldn’t you?

After a sell-out in Spring 2019 and due to popular demand, Sandi Toksvig is returning to The Lowry with her one-woman comedy show on Sunday 12 January 2020.