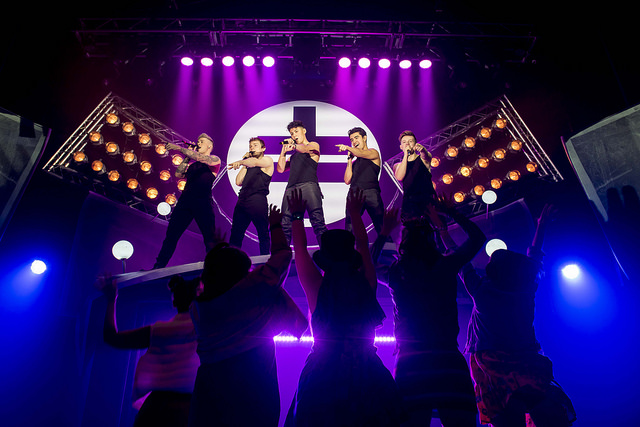 Take That’s Gary Barlow, Howard Donald and Mark Owen talk about their roles as producers on musical The Band

The Band, a stage musical with the songs of Take That, comes to The Lowry in January. Vicky Edwards talks to producers Gary Barlow, Howard Donald and Mark Owen to find out the secret behind its success.

Gary, Mark and Howard (everyone is on first name terms with these guys) admit that right now they are extremely proud producers. Joined by Robbie Williams, and along with David Pugh and Dafydd Rogers, two of the most experienced and well-regarded theatrical producers in the land, the Take That boys find themselves at the helm of a new musical that is winning fans wherever it goes and has extended its tour – including a West End run – due to high demand.

“It is incredible to say we’re coming to London and touring until March next year,” says Howard. “The longevity is brilliant! The key to its success is familiarity; it strikes a chord with people’s lives by being a reflection for anyone who has ever been a fan or a supporter, or anyone who has had a group of friends and known love, friendship and loss. “The only let down is that the music is crap,” he jokes, referring to the Take That hits that provide The Band’s soundtrack.

Mark adds: “We are made up that people are connecting with the show and enjoying it so much. Sometimes I feel a bit guilty for the young guys who won the competition [the five boys who won TV’s ‘Let it Shine’ search for the musical’s title roles] because I don’t think they knew just how much work was involved. But I guess it’s a dream for them and I am made up for them, too.”

“Absolutely!” echoes Gary, delight written all over his face. “I don’t think we could have imagined the pride we would feel every time The Band goes into a new city.”

To be clear, the show is not about Take That. Instead The Band tells the story of a group of 16 year-old friends for whom in 1992, ‘the band’ – a non-specified five-strong group – is everything. 25 years on, the now 40-something women reunite in a quest to fulfil their dream of meeting their heroes.

Cup of tea in hand Gary is in thoughtful mode, pondering on why their show seems to chime with audiences to such an extent.

“I think that friendship really resonates with people,” he says. “Even the idea of the friendship – if you sat us down then we’d all say that friendship is what is at the heart of Take That. It has kept our work strong; we’ve been a gang. The Band is about the relationships really, not the music. You don’t need to be an avid fan, but Tim [Firth – the show’s writer] has so cleverly woven our music into a parallel universe. Whenever I see it I leave happy.”
He’s got a point. Few shows succeed in sending you out quite so elated; dancing all the way home, with love for the special people in your life utterly reaffirmed.

Mark dunks a chocolate digestive into his tea and picks up Gary’s thread.
“It brought me back to when I was a teenager knocking about with my mates and the dreams that I had then. It made me contact old friends after I saw it. People slip from us as we get busy with life, but the show made me reminisce. It was like a pause button.” With a naughty grin he adds: “Oh yeah, and it’s got these amazing songs in it!”

And don’t be thinking that The Band is a show that only ladies or die-hard Take That fans will enjoy. Howard is adamant on that point: “Listen, while guys might be sceptical about coming to see the show, it is relevant to them too. Whether they like the music or not, they will thoroughly enjoy the show.”

As for mentoring the phenomenally talented young bucks who collectively play the title role, Howard admits when growing-up it wasn’t a role he imagined for himself.

“I never envisaged being a pop star let alone a producer – I was on a YTS training scheme to be a vehicle painter and panel beater when I joined Take That, but luckily we had the right people behind us. The lads [of The Band] are really down to earth, which is how we formed our friendship, how we grew up as a group and how we can now re-group. Who knows; maybe Jason (Orange) will come back one day? We’re not looking at it like that, but that we have all matured and stayed mates means that there is always possibility.”

“I’ve enjoyed the mentoring more than anything,” agrees Mark. “You feel like a father to his son and we had sit-down talks about looking after each other and about going out into the world! It has been a real pleasure. Their energy is really positive and so they inspire us. It really does work both ways.”

The show sees the older women looking back at their younger selves and I’m curious to know what advice, with the benefit of hindsight, the trio would give themselves at, say, sixteen. Gary doesn’t need time to think.
“I’d say grab it and enjoy this moment right now. It sounds so corny but this young cast are at such an amazing time in their lives, but they may have some tough years ahead. It’s so important to enjoy the here and now. We give ourselves a pep talk now and again, especially before tours. We really do appreciate all that we have.”

“Yeah, I’d say much the same,” agrees Howard. “I’d definitely advise my younger self to take it all in and enjoy it, although that can be easier said than done. We were literally lifted off our feet and for six years we had no time for girlfriends and family. I have kids and I am so lucky that I have a job that means that I can usually be with them all day long and just go off on tour now and again.”

“What would I say to my younger self?” Mark muses, before laughing and saying: “A lot! I’d probably have a big sit-down with myself! But mostly I’d say just embrace it all; the ups and downs and left and rights. Oh, and don’t have that first fag; don’t start smoking. My thing is chocolate now. Don’t tell anyone but I did eat some of my children’s Easter Eggs this year.”
Harking back to their teen years makes them recall what was going on for them then.

“I so wanted to be a pilot,” Howard remembers. “I’ve still got a dream of flying a plane, although maybe not a commercial airline. I remember that on my wall I had pictures of cars. Weird! I didn’t start getting into girls until I was 16; I was a late starter. But I made up for it!”

“I was quite into football so Pelé, Maradona and Liverpool players were my pin-ups. Music wise it was Madonna and Elvis,” Mark recalls. “I loved Elvis and grew up listening to him because mum was a big fan. I used to put lard in my hair and sing Elvis songs – mum went mad with me!”

Admitting to being obsessed with music from the age of 10, spending hours on end in front of a piano and a synthesizer, Gary’s bedroom wall paid homage to the likes of Adam Ant, The Human League and Depeche Mode.
“I am so grateful that I had music and singing lessons from early on,” he says. “They have been the foundation for a long career; the building blocks. The time when you have no family or work pressures is the time to really learn and I did, thank God.”

So what next for The Band – a second tour?

Gary gives an enigmatic smile. “We have plans because The Band is a musical that we believe in so much. By no means have we reached our goal.”

The Band is at The Lowry, Salford Quays from 16-26 January 2019. See website for full tour details.

Read our review of the show when it premiered at The Opera House, Manchester in 2017.