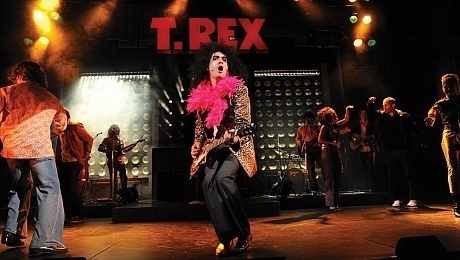 It is easy to pre-judge 20th Century Boy as a jukebox musical that offers little more than a nostalgia trip to the glam rock era of the early 1970s, but you’d be missing a treat if you do. I admit, initially I fell into that cynical camp. I’ve sat through too many shows based loosely around the music of a particular artist or era, which have been at best mildly entertaining, and at worst annoyingly lazy – with a not much of a story and, when it comes to the music, a poor substitute for the real thing.

I didn’t see 20th Century Boy on its first outing in Ipswich and Coventry in 2011. No doubt it held the basis of a good show. However, on this inaugural tour, a redesigned set, rewrites to the script and new cast, has honed it into a great show, and a must see for anyone who remembers the 70s with any kind of fondness.

The story of Marc Bolan’s meteoric rise to fame and a life that was tragically cut short in a car crash at age 29, is told through the eyes of those who knew him best, as they try to piece together a picture of the man as more than a media image for his son, Rolan Bolan.

There is a good story to tell, which allows for other strong characters to emerge. Sue Jenkins gives a heart-felt performance as Bolan’s mum, Phyllis, mixing emotion with humour beautifully. There is the intrigue and betrayal of the two women in Bolan’s life – his wife, June Child (Lucy Sinclair) and his lover and mother of his child, Gloria Jones (Donna Hines). Both women command the stage, as does Luke Bailey as Bolan’s son, Rolan.

There are also memorable performances in the smaller roles, particularly Katia Sartini as Helen Shapiro and the OTT PR Chelita Secunda, who dresses Bolan in that famous leopard print jacket for his first TV appearance. They are such a talented lot that each one really deserves to be picked out in some way, not least the actor musicians who recreate the T Rex sound.

At the centre is Warren Sollars, an extremely likeable Bolan. It would be all too easy to simply hide behind Bolan’s mop of corkscrew curls, heavy make-up and platform shoes to deliver a tribute performance, but Sollars pulls off a much more rounded character who bursts with the confidence of believing he’ll be bigger than Elvis.

It is a high energy show from start to finish, and director Gary Lloyd is to be applauded for pulling off his desire to create that elusive mix of both a musical and a concert. As a modern day musical, it has it all.