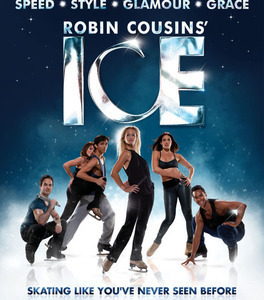 It is fantastic that ITV’s Dancing on Ice has sparked a revival of interest in figure skating, and there is no doubt that the full house at The Lowry owes a lot to this TV exposure. But it would be wrong to suggest that Robin Cousins’ Ice is like the TV show, except to say that if you enjoy Dancing on Ice, this live show will have you hooked. It’s one thing seeing a headbanger from the comfort of your sofa and quite another when you are so close that you can feel the chill of the ice.

Cousins is a judge on the celebrity talent show, but he is also an Olympic gold medallist and the skills that requires are way in excess of anything that can be achieved within the span of a TV series. In Ice, as director and choreographer, Cousins has the opportunity to let his imagination run and the talented skaters to pull it off.

The show opens with classical figure skating to the backdrop of a snowstorm. It is beautiful and skilled, but feels like a slow start, to what soon turns into a thrilling, fast-paced show where sparks literally fly, as skates cut into the ice.

In its broadest sense this is dancing on ice, and there are numbers inspired by its many forms, including classical ballet, disco, Bollywood and jive. There really is something to appeal to everyone, with clowning, circus acts and live singing all thrown into the mix. Kate Endriulaitis’ aerial act sees her doing the splits upside-down while swinging from a hoop and still wearing her skates. She also makes it look very easy, which I’m sure it isn’t.

All of the skaters are terrific, so it feels churlish to pull out a couple. That said, Canadian Vaughn Chipeur, who blends clowning and acrobatics with his skating, and American Brandee Malto deserve a special mention for bringing that indescribable something we call star quality, that can carry a show on its own.

It’s pure entertainment that will make audiences fall in love with skating all over again.