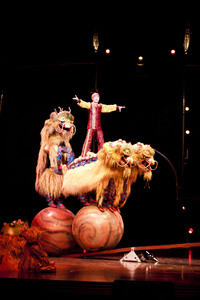 In the past 30 years Cirque du Soleil has changed the face of circus worldwide, from a fun family show to a sophisticated art form, packed with thrills and feats of acrobatics far and beyond what appear humanly possible.

A big top tent is undoubtedly the best venue to view this spectacular company, but Dralion at The Phones 4 U Arena in Manchester is the best Cirque du Soleil production I’ve seen in an arena so far. It’s difficult to create an intimate circus feel in what can be a cavernous space. However, the bold staging for Dralion, with its mix of African, Indian and Chinese themes played out against a back drop of a futuristic gold palace, works the room to good effect.

The show itself is 15 years old, but this is its first UK Arena tour. After so many years of touring this and other Cirque shows, it’s easy for the audience to take for granted the amazing feats on display.

We have to remember, there’s no magic involved here. The stunts and acrobatics you see are for real, yet the performers make it look so easy that I was almost tempted to get on stage and have a go myself.

That is the beauty of this show – it takes some activities that we’ve all tried at home, like skipping, juggling and trampolining, and catapults them into superhero territory. The trampoline act is phenomenal as performers run up and down walls like a real-life Spiderman. The juggler keeps 7 balls in the air, while nonchalantly falling into the splits, and just when you think the acrobats had shown us their best skipping trick, they form a human pyramid and jump the rope as one.

There are far too many highlights to mention in this two-hour show. But it would be a shame not to pick out the Chinese dragons balancing on four foot wooden balls, the light interludes from the clowns, and the aerial pas de duex who make a romantic and exotic pairing.

In all its a feast for the eyes, that on more than one occasion encourages you to put yourself in the performer’s shoes and let your imagination fly.