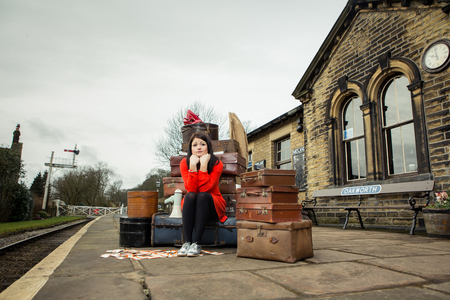 As someone who travels a lot by train, the idea of a play about travelling 21000 miles of rail naturally appealed. I think that the concept will attract a lot of people. Writer and performer Hannah Butterfield has come up with a gem of an idea, but it is one that needs more work to do it justice.

Her one woman show is made up of a series of observations about delays, missed trains, lost tickets, the cost of tickets, feeling alone in a sea of faces, and a bit of romantic fantasy thrown in to make the journey more interesting. Most regular commuters will recognise all of these scenarios, but at times Hannah tries too hard to recreate the mundane boredom of some rail journeys and this leads the show into some painfully slow moments that are difficult to pick up from.

There is a lot of audience interaction including the almost obligatory train comment, ‘Sorry you’re sitting in my seat. There’s a spare one over there, do you mind sitting in that one?’ But it quickly begins to feel repetitive and lacking in the vital energy that audience improv needs.

The humour comes out best when she is speaking from the heart about something she genuinely knows and cares about, like what it feels like to be one year too old for a Young Person’s rail card. Her crazed tap dance while singing about the mind-boggling array of ticket types on offer is fun, and I do think that she has genuinely felt alone and lonely in a busy train station. It is in these moments she shines and the audience responds warmly. At other times, unfortunately it feels like a mishmash of ideas that only begin to scratch the surface of what this play could be.

At one point Hannah asks, ‘Do you think I’m naïve?’ In a way, yes, I do. Judging from this performance, I think she’s watched Brief Encounter and gone on a few train journeys, but not nearly enough.