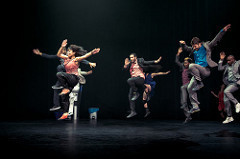 In Palestine, dabke is a dance often enjoyed at weddings and other big celebrations. It is a cross between a circle dance and line dancing, with people joining with arms around each other and kicking out their legs. It is something all cultures can relate to – the English equivalent being dancing to Sinatra singing New York, New York at the end of the night.

And here lies the strength of Badke. It takes this traditional folk dance and infuses it with hip hop, capoeira and circus, to create a performance that feels both authentic to the region it has emerged from and yet universal in its appeal. Everyone understands what it’s like to be swept up in the atmosphere of a party and this show brings all those memories to the surface and pulls you right back there.

Like many parties, the show is slow to begin. It starts in total darkness and all we can hear is the rhythm of the dancer’s feet. When the lights eventually go up there are ten dancers on a stage, which is bare but for a water dispenser at the back. A couple of solo dances follow without any accompanying music, but just as you’re wondering where all this is going there is an eruption of sound and energy and suddenly we’re right at the centre of a street party.

These loud, frenetic scenes are immersive. There is a naturalness about the movement which is infectious, and I could see the audience moving along, as if in their heads they had rushed the stage to join in.

Within the whole, each of the ten performers has their own story to tell. There are lovers falling out and making up, people who have become a bit too intoxicated, people who have wandered to the edge of the party and can only hear a faint beat of where they were, and some plain weird moments where we don’t know what’s going on. These are patterns we can all relate to, but there are also moments of violence where we are reminded that the Palestinian people are living under occupation.

Politics and people are intertwined and divisive, but in the joy of movement there is a freedom that is unifying. At the end of Badke, it is this feeling of being one in celebration that stays with you.