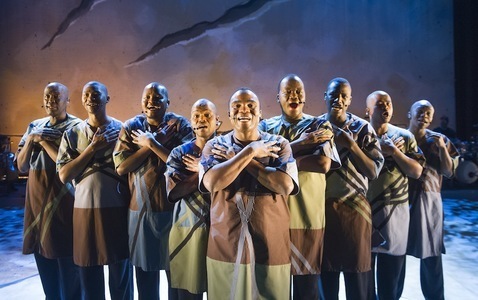 Inala means abundance of goodwill in Zulu. Indeed much goodwill has gone into the creation of this Zulu ballet and, at the risk of sounding like a line from Disney’s The Lion King, that love is almost tangible.

Premiering last year at the Edinburgh International Festival, it has all the hallmarks of the best festival productions, being a collaboration of different art forms in a fusion of world class talent.

Here we have four-time Grammy award winners, Ladysmith Black Mambazo – South Africa’s most successful choral group – performing alongside past and present dancers from the Royal Ballet and Rambert dance companies. The movement is choreographed by the Rambert’s artistic director, Mark Baldwin, with original music composed jointly with London-based pianist Ella Spira, whose love of African music sparked the idea for the show.

With such a range of talent involved there is a risk of it sounding all very high-brow. It’s not. There is nothing you need to know or understand to enjoy this production – you simply need to experience it. There is no story to follow; rather we are immersed in an atmosphere that gives both a taste of Africa and a global celebration of life.

Everything is up-front – the musicians are on stage, and the male chorus, whose previous popular collaborations include the soundtrack for The Lion King and Paul Simon’s Graceland album, are centre stage, marrying their traditional African dance with the classical ballet moves of the professional dancers, whose bodies contort to represent the rich wildlife of the African bush. It sounds chaotic, but somehow, like the nature it represents, it all works seamlessly.

The action plays out against a very simple yet effective backdrop, enhanced by Ben Cracknell’s evocative lighting design, which captures the dramatic changes in the sky, through the weather of the seasons and at all hours of the day and night.

At times you can almost feel the sun shining on the Opera House stage. It is a joyous  and uplifting show that will leave you basking in its warm glow.