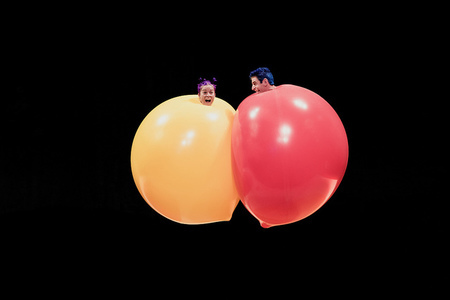 It’s a rare gem of a show that genuinely enchants young and old in equal measure. New York duo, Acrobuffos has found this balance in Air Play, an inventive show that does exactly what it says, plays with air.

The husband and wife team, Seth Bloom and Christina Gelsone, are both professional clowns and between them are also trained in circus skills, physical theatre, mime and ballet. For Air Play they have joined their varied skills with sculptor, Daniel Wurtzel whose work includes pieces with Cirque du Soleil and the Sochi Winter Olympics. Part of me hesitates to call the result, performance art. It sounds too high-brow. Who’d take a child to see something like that? Yet, it’s the instinctual way to categorise a piece that mixes so many forms – circus, street theatre and sculptural artistry – to become something magical.

Dressed in vibrant red and yellow, the pair could be your average children’s presenters. However, their act, as silent clowns, creates a different kind of energy, one of child-like wonder rather than playground mayhem.

To a varied soundtrack from the frenetic Fanfare Ciocarlia to Luciano Pavarotti’s soaring, Nesun Dorma, we watch as they couple play with silks, balloons, glitter and umbrellas – turning ordinary objects into extraordinary sights.

The audience get to play too, as balloons of various shapes are bounced around the auditorium, and large, on-stage fans, blow colourful fabrics, like huge kites overhead. Seth and Christina both join the crowd, sometimes jumping over seats, blasting people with what looks like a cross between a hair-dryer and a leaf blower. There is some touching on-stage audience participation too, when an adult and a child are invited to catch small balloons, swirling overhead in a net.

The show jumps with seeming effortlessness from moments of abandoned silliness to moments of intense beauty. In one moment we are all laughing as the performers each disappear into a man-sized balloon; their heads sticking out of a giant tomato-shaped body. In another we are transfixed by the sparkling beauty of swirling balloons of different sizes, and glitter reflecting like twinkling stars to the dancing trumpets of Jupiter from Gustav Holst’s The Planets.

A canopy of hovering silk, becomes an enormous jelly fish; blowing paper becomes a walk-in snow globe, and an audience of all ages become like children again.