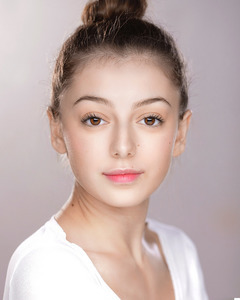 The Extraordinary Tale of Holly Christmas

In 2009, Hollie Steel was the little girl with the big voice, who won a place in the final on Britain’s Got Talent.

Now, aged 19, she is the star of a new children’s Christmas show from Salford-based company, Colour the Clouds, the first festive show commissioned by the Lowry as part of its Associate Artist’s programme.

It’s a big leap from singing live to fronting a stage show, especially in front of an audience of little kids, who if they aren’t interested soon let you know with their fidgeting and chatter.

Thankfully Hollie captivates the youngsters from the off, maintaining a child-like enthusiasm and broad smile. She’s also believable as a schoolgirl and the audience quickly buy in to her adventure as she strives to cheer up her grumpy, old dad and save Christmas.

The story starts with the darkness of many fairy tales – young Holly Christmas lives with her miserable Dad, who tells her there are no special days of the year, not even Christmas day. One day she comes across a magical book of extraordinary tales. Normally her dad (Richard De Winter) wouldn’t let her read such stories, but when he looks at the book it appears she’s reading about napkin folding, leaving Holly to continue her fantastical tale.

Holly reads about a grumpy king and recognises something of her dad in the character. In her search to find out how the story ends our young heroine is helped by two elves, Bob (Jack Alexander) and Sparks (Lorna Tinsley), to bring Christmas spirit back into her home.

The set is like a giant picture book, with a large projection screen at the back, which turns its pages to show various scenes from Holly’s sitting room to a silhouette puppet adventure of a young princess. The elves give a narration and the story unfolds with live music played by the cast, giving Hollie a chance to show us her voice is still as big as we remember.

After the excitement of Holly and the Elves, her dad’s song at the end probably may benefit from being a livelier tune or shorter to keep children’s attention. Sticking too rigidly to the ‘two is enough’ idea, also means there is no opportunity for some easy wins for children in terms of audience participation for a magic wish or a glimpse of Santa in the night sky.

For the most part though, the songs and magic tricks keep the energy high and in all it is a heart-warming new Christmas show that will hopefully still have life after Hollie is too grown-up to play the part.

The Extraordinary Tale of Holly Christmas is at The Lowry from 20-31 December 2017.