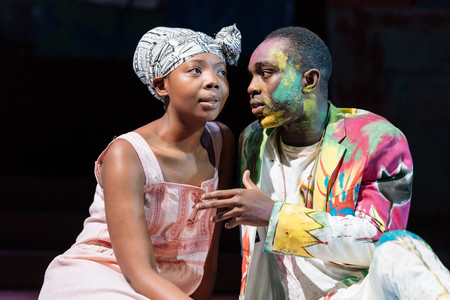 More than 400 years on, Hamlet is still one of the most complex characters in English literature and one of the most coveted stage roles. In the last ten years we’ve seen David Tennant in the role with the RSC, and elsewhere star casting saw Jude Law and Michael Sheen as Shakespeare’s Prince of Denmark.

In Manchester, Rory Kinnear took the MTA for Best Visiting Actor with a National Theatre production in 2010 and most recently Maxine Peake, stepped into Hamlet’s shoes in a gender-blind version at The Royal Exchange.

In comparison, Paapa Essiedu is a relative newcomer, although, judging by his performance, it won’t be long before he too is a household name.

Who would’ve thought staying true to the play could be so revolutionary? Although Hamlet is a young man, it’s difficult to find a young actor with the experience and maturity to capture the character’s complexity. What a find Essiedu has been. In his mid-20s, he gives us a genuine sense of a discontented youth whose world has been turned upside-down by the death of his father and hasty remarriage of his mother.

Essiedu’s Prince is youthful, creative and razor-sharp. He expresses his madness by becoming a hip-hop loving, graffiti artist, and transforms the grave-digger scene from a lament on death to one of enthusiastic childhood memories, lifting the heavy melancholy to give us a clear glimpse of the man Hamlet might have been in different circumstances.

In this sense, Essiedu’s Hamlet is a more rounded and attractive figure than is often portrayed. He is also more complex, because of the fusion of European, African and Caribbean influences woven through the production. We are still in Elsinore, but mixed with that, soldiers march to the beat of African drums; the castle is a deep red rather than cold grey stone; the players are colourful and melodic, Ophelia’s funeral procession is followed by a choir of rich Afrikaans’ voices; and Laertes and Hamlet duel with sticks instead of swords.

Other contemporary twists add female characters in the roles of Osric and Guildenstern, but it’s an easy and smooth switch – if you didn’t know the play, you wouldn’t notice.

Director, Simon Godwin seems to have pulled-off the impossible in keeping true to the play while making it feel fresh and exciting. The action races through at just under three hours – a thrilling ride that’s sure to win the Bard a whole new generation of followers.