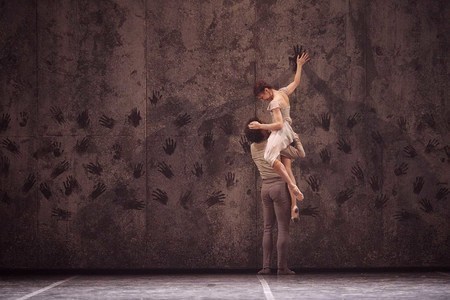 It’s easy to forget how today’s familiar classics were once new and revolutionary art works. We now know Giselle as one of the most traditional pieces of the classical ballet repertoire, but its first Paris performances during the first half of the 19th century hailed a new era of dance that brought the ballerina centre stage in a way not previously seen.

The strength of the ballet has stood the test of time, providing plenty of material and inspiration for constant re-workings. Yet in the hands of choreographer, Akram Khan it feels not so much re-imagined as revolutionised in a way that takes not only this ballet, but the art form itself in an exciting new direction.

The heart of the story is the same one of doomed love between two young people inhabiting very different worlds. Here instead of peasant and nobleman we have migrant factory workers (the outcasts) and their wealthy landlords, and the gulf between them is almost otherworldly.

When we first meet the Landlords they emerge from behind the huge revolving stone wall which separates them as if stepping off a spaceship. These are exquisite and extravagant creatures wearing haute couture clothing that is as impractical as it is imposing – there is no chance that these characters are going to work and that includes to dance for us.

In contrast the migrant workers, dressed in flimsy, colourless rags fill the stage with an energy that is impossible to be indifferent to. Whether they are pushing their palm imprints into the wall or hunched as the whirring machinery of a clothing mill their dramatic presence personifies the tensions inherent in their oppression.

In this, his first full-length ballet, Khan’s talent for creating memorable visual images is even more striking – one example of many is the strength of the corp to ballet as the Wilis on pointe with four-feet long sticks between their teeth.

Designer Tim Yip complements this with a set that is at once both simple and imposing – the revolving wall becoming an oppressive metaphor for the whole tale.

Every aspect of the production goes into creating an absorbing experience. Mark Henderson’s stunning lighting design keeps the dancers for the most part in half-light – figures living among the shadows with only glimpses of radiance.

The movement is almost inseparable from Vincenzo Lamagna’s score, adapted from the original by Adolphe Adam. It is a challenging mix of haunting melodies overlaid with sounds of radio interference, crashing waves and industrial noise.

Here the romance between Giselle (Alina Cojocaru) and Albrecht (Isaac Hernandez) is not so much a joyful distraction but a glimpse into the emotional heart of separation. Their pas de deux while beautiful are always tinged with sadness, at times every muscle of Cojocaru’s delicate body appear taut with anguish.

The influence of Khan’s training in Indian kanthan and contemporary dance combined with English National Ballet’s classical excellence has given us a Giselle like we’ve never seen before.

The piece is a collaboration between English National Ballet, Sadler’s Wells and MIF. Why MIF has decided to programme it outside of its biannual festival is not clear. But if it is a trailblazer and taster for what is to come in July 2017 it has set the bar incredibly high.

Akram Khan’s Giselle is at The Palace Theatre, Manchester from 27 September to 1 October 2016.