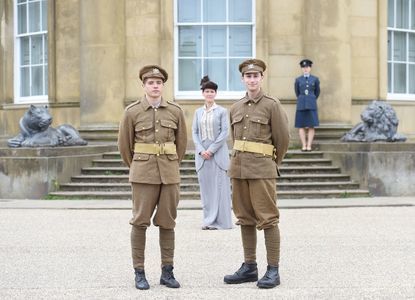 It is seven years since Feelgood Theatre last performed at Heaton Park, and its close association with the site has been missed. Whispers of Heaton is a welcome return for the company, which after 16 previous promenade productions has become very much a part of the park’s history.

It feels apt that a company with such a long association with Heaton Park is bringing the history of its magnificent hall to life with a production that showcases the region’s artistic talent in writing, acting, music and dance.

Whispers of Heaton is a new commission which focuses on the history of the eighteenth century hall during the two World Wars – first as a military camp for the Pals Battalions, and later as a base for the Air Force.

The hall is not normally open to the public, and stepping inside feels like we’re being given a glimpse of a secret world. Although it’s a ghost of its former self, the ornate ceilings, marble sculptures and wide-open staircase give an immediate sense of the hall’s past grandeur. Inside, it’s not hard to imagine we’re back in 1914.

This is where the first of the two plays, The Fight, starts. Written by Cathy Crabb and Lindsay Williams, who recently collaborated on Dreamers for Oldham Coliseum, it tells the story of young boxer Walter, all cocky and full of fire, who returns from war barely recognisable from the energised youth he once was.

In five short scenes we move through the hall and almost three decades of history, touching on Manchester’s place in the women’s peace movement, and ending up in a room with Walter’s son, a soldier in the Second World War.

The dialogue is interspersed with interpretive dance from Tangled Dance Company. Coupled with the melancholy sound of Stephanie Stamopoulos on cello and the haunting voice of Amy Webber, these interludes gives the audience time to soak in the atmosphere of the surroundings as well as ponder on the reality of such untimely loss of life.

The next play, The Unknown Bugler, by Peter Kerry, follows as another scene, with the audience moving into the music room which houses an impressive chamber organ, built by Samuel Green in 1790.

That the plays aren’t separated out more distinctly could be slightly confusing for those who haven’t read the programme notes. Yet, that aside, this is a play which effectively demonstrates the importance of music and the arts in boosting morale and creating identity.

Even in the most desperate of times we still long to be entertained. It is a message relevant in our cost-cutting times, and when seen in the context of war becomes at once both uplifting and heart-breaking.

There are some lovely performances, particularly from Jon-Paul Bell, who as Walter, and later as Albert, embodies all the enthusiasm and energy of youth, bringing the loss of so many young lives home with a force that isn’t easy to shake off.

All involved should be applauded for bringing these stories and the old hall to our attention, because Whispers of Heaton is something to shout about.