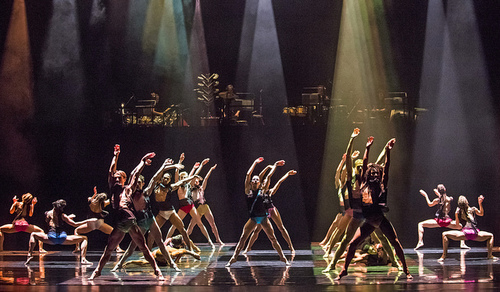 Britain’s oldest dance company, Rambert, is celebrating its 90th anniversary this autumn. And if its audience at The Lowry is anything to go by, the company has plenty of young fans to fill theatres for another 90.

It helps that Rambert is now on the GCSE and A-level dance syllabus. But as anyone who sat through a production of the Scottish play as a teenager will tell you, studying it and enjoying it are two very different things. Here the teenagers were clearly transfixed.

There is something wonderful about seeing young people’s imagination being captured by what for many is considered high art. In this triple bill Rambert does what it does best – gives the audience a taste of something new, something a bit more abstract, and a high-octane piece to leave everyone wishing they could jump on the stage and join in.

Flight, by Polish choreographer Malgorzata Dzierzon was premiered at The Lowry on Wednesday, and is one of five new pieces commissioned to celebrate the company’s 90th year. Previously a dancer with the company, Dzierzon instinctively knows what works and has created a semi-autobiographical piece which explores ideas of boundaries and borders, migration and movement, familiarity and anonymity, and sometimes the sheer chaos of city living, with often jerky and frenetic movements. Solo, paired and company dancing is combined with multi-media projections and a stone backdrop that breaks and slides to form a constantly shifting environment, accompanied by the Rambert orchestra, with soloists on the piano (Yshani Perinpanayagam) and violin (Christopher Tombling).

The second piece, Frames, choreographed by Alexander Whitely, takes a similar transitory theme as it contrasts the ephemeral nature of dance with the permanence of the metal structures with which the dancers frame their movements. It’s an athletic piece for the dancers, with some extraordinary backward bends.

The titled piece, A Linha Curva, by Itzik Galili, brings the evening to a riotous finale. Premiered in 2009, it’s easy to see why it’s still a highlight of the company’s repertoire.

You can imagine the squeals from the audience when the male dancers come running on in black silk vests and fluorescent speedos. The vibrant costumes are matched by a colourful, flashing lighting grid. For this dance a four-piece percussion band is visible, raised up at the back of the stage. Dancers whiz across the floor on skateboards. The whole stage is alive with a Latin-American vibe and, although meticulously choreographed, the movement appears free and joyous.

A Linha Curva is cheeky, sexy, funny, and the nearest thing to a carnival you’ll ever get without being at one. The audience went wild, and I’ve no doubt that if the school kids forget everything else about their dance studies they’ll remember this.