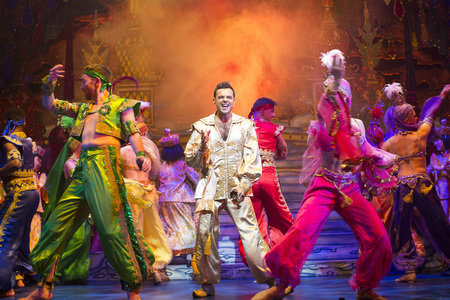 Recent years have seen mega-stars, like Priscilla Presley and David Hasselhoff on the bill. But sometimes blowing the budget on one box office breaking name can leave the finished production feeling a little imbalanced.

This year the theatre could have had the opposite problem with several star names vying for attention. But the mixed-billing in Aladdin is a winner with adults and children alike.

It could be thought a risk to put a magician into what is usually the central comic role of Wishee Washee. But in the hands of Neil Henry it works well. His magic – from conjuring a bird from the air to drawing a bowling ball and having it drop from his sketch pad – has the kids wowed. These are sensational tricks, woven into the script as if they are all part of the magic that is pantomime.

In a show with a spectacular flying carpet and not one, but two, genies you can never have enough magic and it’s great to see it integrated in this way rather than a separate part of the show.

Henry’s energy is high and the youngsters quickly warm to him. He has his share of jokes, but the main comedy falls to Eric Potts as the colourful Widow Twankey.

Potts, who also wrote the panto, is not only a terrific dame he is a mighty stage presence and a comedy force who pitches just right for a family audience. His rendition of Hello Dolly is a full musical show-stopper.

It is good to see John Thomson back on stage in his home city. He is a charming Abanazar with great stage presence and appeal. Always with a twinkle in his eye, he’s not a thoroughly nasty villain but one children love to boo.

The audience love Thomson’s references to his characters from The Fast Show and Cold Feet. And he always has a comedy twist, such as bursting into song with Spandau Ballet’s Gold each time he thinks about the hidden treasure.

Sherrie Hewson, as the Genie of the Ring, similarly plays-up her well-known persona with plenty of tongue in cheek references to her parts in Loose Women, Benidorm and Coronation Street.

Even Aladdin (Ben Adams) is a household name. Former lead singer with boyband A1 and finalist of Celebrity Big Brother and Masterchef, he brings adventurous charm and strong pop vocals to what can often be a bland role.

As well as treating the audience to one of A1’s hits, the cover of Aha’s ‘Take On Me’ there is a good mix of songs for all ages.  And the end sees the whole audience on its feet dancing to Proud Mary (Rolling on the River). It’s a great party atmosphere that has everyone leaving with a smile on their face.

The four-year-old critic with me loved it and gives it 10/10!