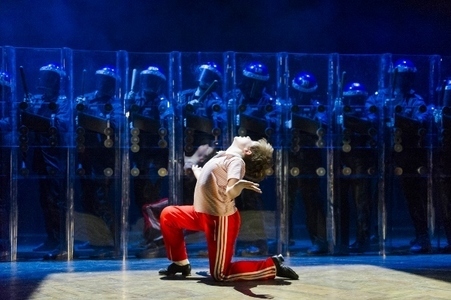 I’m coming a bit late to the party with this one I know, but when something is this good I don’t think too many people can shout about it or shout too loud.

I missed press night because I was in York for the official launch of my latest book with the Archbishop of York, John Sentamu’s Agape Love Stories. Taking Christmas out and a heavy cold in between the first chance I got to see the show was early January – a month into its Manchester run with one month still to go at the city’s Palace Theatre.

Long theatre runs such as this are great, because they give an audience to spread their enthusiasm by word of mouth with enough time for their friends to still grab tickets while they can.

I for one am pleased that this time the run is lengthy, because it’s a show I’d been looking forward to all year. I saw it many years ago in London’s West End and this is the first time since opening in 2005 that its toured regionally in the UK.

In terms of the story it sticks very closely to the hit film on which it’s based. That’s largely because it shares a writer (Lee Hall) and director (Stephen Daldry) with the film. Bringing in the added talent of Elton John to write the music seems to have lifted this story of a young boy trying to express in the world into another sphere. It was an amazing success as a film but it works even better as a stage musical than on the big screen.

I grew up in a mining village during the 1980s so the historical and political context comes with a lot of emotion for me. That said, even those with no mining connections couldn’t fail to be moved by the power of this feel-good story, played here with such humour and heart.
At the time when the film opened in 2000 I was working as a reporter on the Middlesbrough Gazette. Jamie Bell is a household name now, but then he was a young boy from nearby Billingham, plucked out of obscurity and propelled into the international spotlight. At the time we all wondered how the film-makers could have imagined finding such a talented kid to play the part of Billy.

In Manchester there are four sharing this stage role, aged 11 and 12. I saw Lewis Smallman in the role of Billy, whose all-round talent (dancing, singing and yes – mastering the accent) is stunning for someone any age, nevermind someone so young.

Nine-year-old Elliot Stiff from Sunderland makes a terrific stage debut as one of three boys in the role of Michael, Billy’s cross-dressing young friend. He brings both fun and touching emotion to the part – his dancing duet, Expressing Yourself with Billy being a real show stopper. Although small they both fill the stage with a wonderful presence that has the audience captivated.

In the performance I saw, Amy Rhiannon Worth stepped in as Mrs Wilkinson giving an energetic powerhouse of a performance. Her initial scenes have an air of Miss Hannigan from the musical Annie – in that she gives the impression of being even meaner than rough and ready, boxing tutor, George (Leo Atkin). There’s nothing politically correct in the way she speaks to her young ballet students and pity any poor girl who’s a bit on the podgy side. Soon though her heart shows through as she rides a whole gamut of emotions from frustration, pride, determination, care, love, joy and plenty of laughter.

Martin Walsh plays the part of Billy’s proud, miner father, a widow who is struggling to keep his family together without an income during the year-long strike. He has the perfect mix of gruffness and heart. And for those who need i,t the programme even has a translated list of his favourite phrases.

Even if you don’t come out understanding, howay it’s reet cush, your emotions will tell you what it means. This is a roller-coaster of a show that never lets up. It’ll have you laughing and crying. And like young Billy when he dances, I left flying.

Billy Elliot the UK tour is at the Palace Theatre, Manchester until 28 Jan 2017. For details of tour venues visit  billyelliotthemusical.com