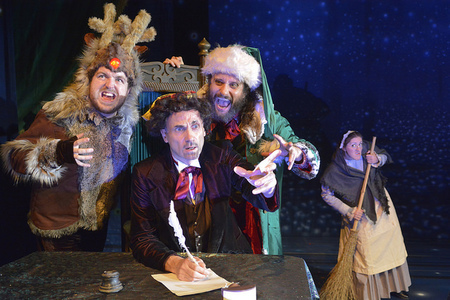 It’s a Horrible Christmas at the Lowry this year, but judging by the reception of Friday’s audience it could be one of their best.

The show is a seasonal spin-off from Terry Deary’s Horrible Histories, whose ingenious concept of mixing historical fact with fun has captivated young minds for more than 20 years.

Deary’s stories are in good hands with Birmingham Stage Company – the team behind the Horrible Histories stage productions and David Walliams’ Gangsta Granny.

Of course, no child wants a horrible Christmas. But that’s what could happen if bad Santa, Sydney Claus (Chris Gunter) gets his way.

The action starts on Christmas Eve in the Watson household, where young Wendy (Rebecca Livermore) has decided she’ll have an early peek at one of two of her presents – never a good idea.

After being caught-out by her parents, she’s told that all her presents had better be back under the tree by morning. But between now and then Sydney Claus sneaks in with other plans.

He may be dressed in a red suit and have a red-nosed reindeer side-kick (Ashley Bowden), but this Bad Santa has a black beard and it’s clear from the start that he is an imposter. Now, the challenge for our young heroine is not just to rescue her own presents but to stop this bad Santa spoiling Christmas for everyone.

Helped by Horrible Histories’ answer to the good fairy, Shirley Holmes (Salford actor Lauryn Redding), the pair go on a time-travelling adventure through the history of Christmas.

It’s an action-packed journey that takes them right back to the nativity; playing ghosts with Charles Dickens, and sing-songs with King Henry VIII and a rapping Charles II (a versatile Neal Foster).

Jacqueline Trousdale’s set design is effective in its simplicity, which adds an almost cartoon feel at times and allows the action to zip along at pace. The lively cast are full of energy and get the audience on-board from the off, never allowing a lull where attention could wane.

As an alternative festive show, it incorporates many of the best bits of pantomime, with plenty of crowd interaction and loud boos for the villain. Toilet humour gets the youngsters giggling, Wendy’s favourite exclamation being ‘Polar penguin poo!’ There are horrible cracker jokes like  ‘Why is my meerkat missing its centre claws? …because, centre claws comes at Christmas!’

At the same time it is littered with plenty of interesting historical facts that will be news to many of the adults watching – who knew, Santa Claus was green until the 1930’s?

Horrible Histories is that rare gem of a family show that genuinely appeals to all ages from 4 upwards. If you think you know about Christmas, this show will make you think again.

Horrible Christmas is at The Lowry from 7 December to 8 January 2017.