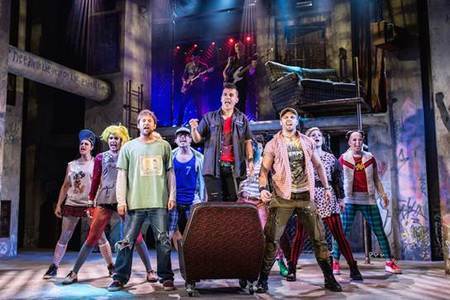 When American Idiot was first staged in 2010 it blasted a hole in what audiences had become accustomed to from musical theatre and particularly jukebox musicals, cobbled together from a catchy back catalogue.

Six years on and it’s still as edgy, tackling issues like teen pregnancy, life-changing war injuries, post-traumatic stress disorder and at the centre of it, the nihilism of heroin addiction.

As you can see it’s not your usual feel-good musical by any stretch of the imagination.

The story is based around the songs of Green Day’s 2004 concept album of the same name, written at the height of the Iraq War. At the time the album was an ambitious project in the style of a rock-opera, telling the story of a nation disillusioned by war, caught up in fear and led by what they saw as hypocrites.

It’s a recipe for sad, cynical, frustrated youth and that’s what we have here. Three boyhood friends, each searching for meaning in an America that seems to have lost its dream.

There is Tunny (Cellen Chugg Jones), your strong, all-American, blond who chooses the patriotic route of the army; Will (Steve Rushton) who stays home holding the baby, and the unwashed Johnny (a terrifically talented, Matt Thorpe) whose rebellious descent into drug addiction drives the narrative.

X-Factor finalist, Amelia Lily takes on the role of Johnny’s love interest, Whatsername. The punk set-up suits her style well. As we already know, she has a great voice and is certainly more than a passing Whatsername for the audience, although it’s a small part compared to her lead-name billing.

In many ways the story is more akin to a tragic opera than traditional musical theatre. It’s told the same way too, almost sung throughout with minimal speech. This makes the lyrics sometimes difficult to follow, but the mixed feeling of rebellion and despair is inescapable.

This production comes to Manchester following a West End run at Leicester Square’s London Arts Theatre. It’s still as in your-face, loud and brash as the first time it visited Manchester Palace in 2012. The steel staging is grungy, the lights blinding and the music ear-blisteringly loud.

Coming with an age recommendation of 14 plus, American Idiot is a grim tale that won’t be to all tastes. But being a musical it doesn’t leave the audience completely bereft as this multi-talented cast  pick up their guitars for a rocking encore of perhaps Green Day’s most well known track – Good Riddance (Time of Your Life).

American Idiot is at the Palace Theatre, Manchester from 5-9 April 2016.