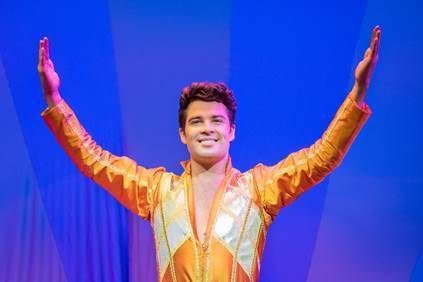 Joseph and the Amazing Technicolor Dreamcoat

Joe McElderry was two-years-old when I first saw Joseph in 1993 with Philip Schofield in the lead role. I’ve lost count of the number of Josephs I’ve seen since. In recent years it’s a part usually filled by a TV talent show favourite and in this respect this production is no different. The difference is that this TV talent winner has the X-factor and some.

Given his resume it’s hard to believe that Joe McElderry is only 24. He’s still introduced as X factor winner, a title which shot him to fame at 18-years-old. Since then it seems there’s not much he can’t do. Aside from a successful recording career (he is the first X-Factor winner to release four albums and he writes his own songs), McElderry won Popstar to Opera Star and later Channel 4’s controversially challenging, The Jump. Now he’s trying his hand at musical theatre and it is a role that suits him well. I can’t remember seeing a Joseph with such strong vocals – his Close Every Door is incredible.

McElderry has the talent and the audience following to make a successful stage career if he wants it. Sometimes watching him I wished he would loosen up just a little and simply let his talent shine. It’s as if he isn’t aware how good he is and in a way that’s part of his charm. The audience loves him, but it’s clear the boy from South Shields doesn’t take his fan base for granted. He gives everything he’s got and I’m sure has won plenty more fans in the process. Going to hear him sing is worth the ticket price alone.

Britain’s Got Talent runner-up, Lucy Kay holds the stage well as narrator to the biblical story of Jacob and his 12 sons. The 11 brothers bring a wonderful energy to the show and Emilianos Stamatakis is an entertaining Pharaoh.

It’s a vibrant, heart-warming show, simply staged with a bit of something for all musical tastes from gospel to rock ‘n’ roll, country and western to Caribbean calypso. Hearing it sung this well reminds us just how infectiously joyous this Andrew Lloyd Webber/Tim Rice collaboration is, and why it has attracted crowds for more than 35 years.

Joseph and the Amazing Technicolor Dreamcoat is at the Palace Theatre, Manchester from 29 March to 2 April 2016.