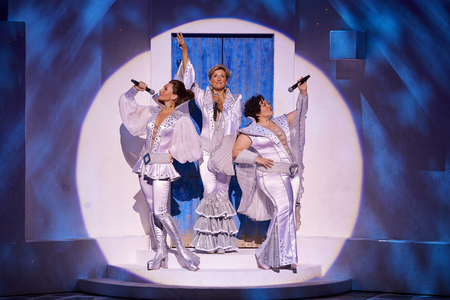 There’s always the exception that proves the rule. And when it comes to juke box musicals, Mamma Mia is it.

Without a doubt, the feel-good appeal of ABBA’s disco beats has a lot to do with the show’s phenomenal success. But what elevates it above others in the genre is the careful crafting of a story by Catherine Johnson, which uses the often heart-breaking lyrics to dramatic effect while never losing sight of the music’s overall upbeat tempo.

For those who haven’t seen it, (and apparently that’s not many if we’re to believe the producers that more than 10% of the UK population has now seen the stage show, aside from the many millions more who saw the film with Meryl Streep), it’s a romantic comedy set on a Greek island over two days – the day before and the day of Sophie’s wedding.

Sophie, the beautifully, sweet Lucy May Barker, is head-over-heels in love with Sky (Phillip Ryan) and with his beach-ready body and cute smile it’s not hard to see why. There’s only one thing missing from the happy day – her father. Sophie doesn’t know who he is, but surreptitious reading of her mum’s old diaries reveals the possibility that he could be one of three men, all of whom she invites to the island for her big day.

Meanwhile mum, Donna (Sara Poyzer) is taking a trip down memory lane with old friends, Rosie (Jacqueline Braun) and Tanya (Emma Clifford), from the one-time girl band Donna and the Dynamos – cue the chance to dig out the platform heels and sparkling flares for one-last performance. Wait ‘til she finds out that’s not the only part of her past she’ll be reliving tonight.

Many of us know what’s going to happen next, but the strength of this production is that we enjoy the story’s twists and turns just the same. And that is in no small part down to the consistent high energy of the cast and a large, strong ensemble, jumping high splits as if it’s nothing.

It would be easy for a show as successful as Mamma Mia to cut production values and still draw in the crowds, so it’s nice to see that audiences for the UK tour are not being short-changed. The set is simple, Greek white buildings with a turquoise backdrop for the sea, but the energy is high. Most of the cast have played the same characters either in the West End or on the recent International Tour and they bring a comfortable confidence that makes for a slick performance with the humour high and timed to perfection.

Sara Poyzer’s strong vocals make her a perfect Donna. And there is no worry about reaching the right chemistry between herself and former Corrie actor, Richard Standing (Sam – the Pierce Brosnan part in the film), as the couple are real-life husband and wife.

Braun and Clifford bring the house down with their playful rendition of Chiquitita. Following Julie Walters in any role is a tough act to follow. Braun knows that everyone expects her to be the funny one and she delivers every time; raising the roof again as she chases Donna’s old flame, Bill (Christopher Hollins) in Take a Chance On Me. Clifford is a convincing cougar in the memorable beach-scene to Does Your Mother Know, giving another opportunity for the ensemble and their buffed-bodies to shine.

This new production plays more on sexual innuendo in its choreography, but it’s always with an eye to humour rather than smut. I hope, as the show continues its run, that it doesn’t become so raucous as to lose the natural sense of fun at the heart of its appeal. Right now this UK tour holds all the energy and charm that has made Mamma Mia a world-wide phenomenon and a feel-good favourite.