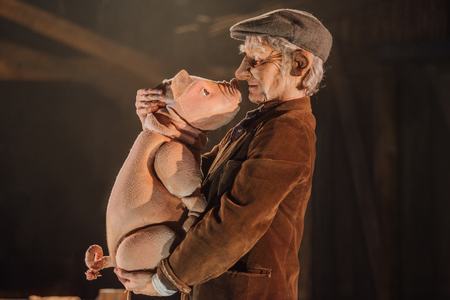 Babe The Sheep-Pig is a story that has captivated young imaginations for more than 30 years.

‘A sheep-pig, that’s silly!’ my five-year-old theatre buddy laughs before we arrive. It is a ridiculous concept that twists and turns into a fantastical adventure.

As those who have read the children’s book by Dick King-Smith or seen the 1995 Oscar-winning film will already know, this is the classic underdog tale. Or, in this case, it’s a pig who finds love and friendship on Hogget’s Farm when adopted by sheep-dog, Fly as one of her own.

Most of the young audience seemed to be familiar with the story and in retrospect this is probably a good idea. Although suitable for all ages and given a guidance of 3 plus, there is a lot to take-in and it doesn’t shy away from difficult topics such as most farm animals ending up on the kitchen table. There is also a moment when an old sheep is killed by a wolf-like dog and unfortunately this is the defining moment of the show for my young companion.

Adapted for the stage by Oliver Award-winning playwright, David Wood this isn’t a traditional children’s show and there are moments when it seems to take the slow-paced rural life a little too literally at the risk of losing the attention of its young audience.

Madeline Girling’s set design has all the earthy colours of the farm, which looks beautiful but doesn’t give the energy lift of bright colours. Barnaby Race’s original score of Celtic rhythms, also feels slightly grown-up to fully inject the joy required of the final scenes.

That aside, Babe wins on the cute factor. Max Humphries and Dik Downey’s puppet creations are extraordinary in the emotion they convey. As well as our hero, Babe, there are enthusiastic sheep-dog puppies and a terrifying animatronic wolf-like dog which is a nightmarish mix of human, puppet and spindly robot.

Farmer and Mrs Hogget also wear partial masks, giving the production the feel of watching an animation, drawing us into the world of the play where anything could happen.

There is a lot for children to take from the warmth of this polite little pig, who refuses to dismiss any of the farm animals as stupid. But the final act needs more clear joy and a feeling of triumph for young Babe to overcome the sadness that has gone before.

My young critic’s verdict: ‘There were some happy bits, but it was mostly sad.’ To be fair, that may be because he hadn’t heard or seen the story before but if the stage show can’t stand alone – that won’t do, Pig. That won’t do.