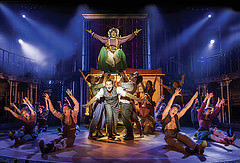 It is a testament to the size of Manchester’s theatre going public that many big shows are now making their way to the region not once, but twice on a national tour. Last year Cameron Mackintosh’s production of Barnum played at the Palace Theatre, this time it’s just across the water at the Lowry in Salford.

I wanted to see it again for two reasons. First, it is an enjoyable show that isn’t performed very often, mainly because it is difficult to find a star who can meet all the demands of the lead role – sing, act, charm the audience, and throw in a few genuine circus tricks while doing it. The second is: last time the show was in Manchester, Brian Conley, who plays circus impresario Phineas T Barnum, was unwell, and although he still went ahead with the shows, I wanted to see how it compared once he had his full sparkle back.

Perhaps it is Conley’s renewed energy, or that the cast is generally more comfortable as the musical reaches the end of its long tour, but this time around it feels a lot slicker.

Phineas T Barnum was a showman, and so is Brian Conley. He is such a big stage presence that he needs a vehicle that allows him to take centre stage and shine as the all-round performer that he is. While he is more than ably supported by a multi-talented cast, this is essentially Conley’s show. Barnum’s circus was the greatest show on earth because of Barnum, and when this production works like a dream it is because Conley is on top form. Making people laugh may not be a circus trick, but it’s the biggest attraction of them all. If that makes me a sucker for Conley, as Barnum would put it, so be it.

This is a fun, lively and colourful show with a high feel-good factor that mixes circus and song with a true story from the 19th century that has a nostalgic pull for many people who visited an old-fashioned big top as a kid.