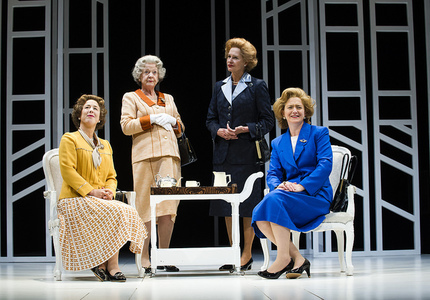 There is clearly a lot of dramatic opportunity in any story about the Queen and Margaret Thatcher. But to find the real humour in it – that is the genius of Moira Buffini’s play, Handbagged.

Of course the sharp one-liners are all the work of the Cheshire-born playwright, because no-one really knows what was said in those weekly meetings between the two women. But when set against the backdrop of real-life events, Buffini manages to add plausibility to these imagined conversations that have us looking at familiar world figures like never before.

If this is rewriting history, then the play cleverly shows us we can all be guilty of that over time, with juxtaposition of the young and old Liz and Mags, who frequently contradict not just each other, but their younger selves.

History tells us the two didn’t always see eye to eye – like when the Queen used her 1981 Christmas speech to speak out in a gentle but damning way against government policy on Northern Ireland, unemployment and treatment of migrants. And several years later there was a Sunday Times front page story expressing an insider’s view of the monarch’s supposed dismay at her uncaring government.

This translates to the Queen musing, ‘For a Methodist she’s remarkably unchristian,’ and ‘if she’s got a dog, we’ve got a subject’.

The script is intelligent and witty, but it takes a sparkling cast and careful direction to make it hilarious. This production wins on all fronts. The warm, likeable, Emma Handy and appropriately frosty, Sanchia McCormack as the younger, more high-pitched Liz and Mags, manage to exude energy from often seated positions. Kate Fahy as T is the more statuesque, deep-voiced Thatcher we are familiar with. But her portrayal is far more than a caricatured impersonation, bringing out a humanity and frailty to the role that makes us engage with Thatcher the woman as well as the Tory leader.

Susie Blake’s impeccable comic timing and wry delivery makes for an hilarious Q, who can erupt the house in laugher simply with a look. While Asif Khan and Richard Teverson work their socks off playing a whole host of other well known faces from that time.

It is tremendous fun, with fondness and irreverence for the monarchy all mashed-up, like the best of memories from not necessarily the best of times.