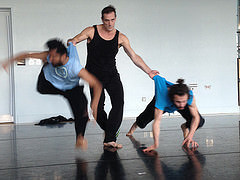 Beauty of the Beast, Dance Review

As Resident Artists at The Lowry, there was clearly a celebration going on for the premiere of Company Chameleon’s new show, Beauty of the Beast.

I must admit that I found both the idea and the title unappealing. The theme of the show is about male group dynamics, and the very idea of man as a beast tells me something of the types of men the dancers would be portraying. As it sounds, at times the atmosphere on stage was menacing, but the movement was so imaginative and entertainingly choreographed by co-artistic director Anthony Missen that my initial reservations soon dissolved. Indeed, I can’t ever remember laughing so much during contemporary dance – the exploration of gang culture initiation rites is hilarious.

The beast within is brought out in some sensational fight scenes, while at other times the men do literally portray beasts, with one man ‘walking’ two of the dancers like pit-bull type dogs. However, while these make for the most amusing scenes, the show is not all about the riotous and violent side of the male psyche. There is beauty too, expressed in the camaraderie, vulnerability and physical strength of the performers.

The six dancers perform on a bare stage so there is nothing to detract from their movement and form, with the scenes set simply, yet effectively, using sound and Yaron Abulafia’s atmospheric lighting. The athleticism and gymnastic ability on display are exhilarating.

The home turf support ensured a near full house on Wednesday, and the audience didn’t shy from showing how much they loved it. If ever there was a show to attract more young men into dance, this is it.

Company Chameleon’s Beauty of the Beast is at The Lowry from 22-23 October 2014.