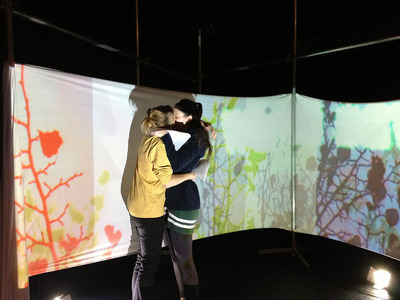 There is something very worthy about the latest new play from the Developed with the Lowry programme that makes me want to warm to it much more than I can.

The writer, Tuheen Huda is also a practising hospital doctor, working in intensive care, and he has worked with recovering addicts, other health professionals and scientists to create a piece of theatre which sets itself the ambitious task of changing public opinion on addiction. I have to applaud the idea, which has been developed in conjunction with Manchester Science Festival, but the production has set itself a high bar.

The play starts with two women at a funeral – a funeral director, Elaine and the grand-daughter of the deceased, Jessica. The action moves to a nightclub where it quickly emerges that Elaine has a taste for neat whiskey, while Jessica has a nose for the harder stuff. It’s disappointing, but not shocking, or even surprising, to learn that a young doctor, like Jessica has a cocaine habit – after all doctors deal with drugs of one kind or another every day.

There is an interesting twist when the action switches and the two actresses take on the roles of hormones in the brain. They unravel the twisted sheets so that they become three big screens on which various images are projected, including the inside of the eyes. During these scenes we also hear the voices of real life addicts. The idea has potential, but as it stands felt like an in-joke that assumes too much prior knowledge of the workings of the human body.

Both Jilly Bond (Elaine) and Rosie Fox (Jessica) give decent performances and there are some amusing lines, but I wasn’t convinced of either’s addiction and neither did I feel that I learned anything new about addiction from the inner-body interludes. In the end the play was sitting between too many stalls and is trying to do too much in the space of an hour. Is it entertainment, public service announcement or education? In trying to be everything, unfortunately it ended up doing none of these very well.

It is clear that Huda, who won the Pitch Party development prize at the 2012 Re:Play fringe festival with Pandamonium, has a lot of experience to draw from and can write entertaining scenes and characters, but there is much more potential to be developed in this play if his talents are to be shown at their best.