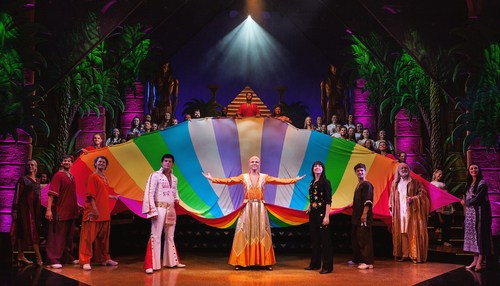 Joseph and the Amazing Technicolor Dreamcoat

Joseph and the Amazing Technicolor Dreamcoat is a musical that audiences never tire of seeing, no matter how many times it tours, and I count myself in that.

There’s good reason for its enduring popularity – the story, taken from the Bible’s book of Genesis, has clearly stood the test of time, Andrew Lloyd Webber’s music brings together a wonderful mix of styles and Tim Rice’s lyrics are both clever and amusing.

It would be easy to rely on this solid base, so it’s good to see a production which has worked to do justice to the vibrant, timeless piece that it is. Sean Cavanagh’s pyramid stepped set is simple yet effective, providing both a traditional story-book feel and a touch of the surreal, with singing camels and pop-up sheep. Although Bill Kenwright has been touring this production for some time, it still feels fresh, energetic, and funny.

There are new faces in the three lead roles. X Factor finalist Lloyd Daniels makes an impressive musical theatre debut as Joseph. He certainly looks the part with his white blond hair, boyish good looks and wide smile, and he also manages to bring the emotional punch that the role requires, from the cry of Close Every Door to the joyous, Any Dream Will Do.

Danielle Hope is another star to have risen from reality TV. As winner of BBC’s Over the Rainbow, she too made her musical theatre debut in a leading role as Dorothy in Wizard of Oz. Here, she is an attractive narrator and has the necessary clarity to her voice for the part.

Former EastEnders actor Matt Lapinskas doesn’t quite bring the same vocal quality to the Pharaoh, but he has plenty of charisma to make up for it.

It seems churlish to pick out one of the 11 brothers and not the others, but Richard J Hunt, in the dual role of the baker and Judah, had the audience in stitches and is like a sunbeam every time he comes on stage.

The strong and energetic cast is supported by a heart-warming children’s choir from Stagecoach Theatre School in Chester, who are on stage throughout.

In all, it is a fun, feel-good evening that sends you out singing, like every good musical should.

Joseph and the Amazing Technicolor Dreamcoat is at the Palace Theatre, Manchester from 21 to 25 October 2014.