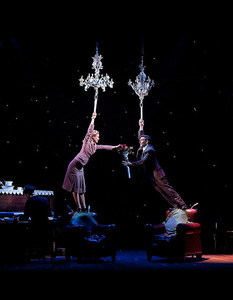 The 10th anniversary revival of Kneehigh’s musical adaptation of Noël Coward’s Brief Encounter has been one of the most anticipated theatrical events this year. And in many ways, a story about longing is all the better for the wait.

Embracing the work’s celebrated cinematic heritage, director Emma Rice has created a multi-media piece that at once feels both nostalgic and present. There is more than a nod to David Lean’s 1945 film classic, with the use of black and white projections. At the same time, technology moves the telling into a new dimension with actors appearing to move seamlessly from one medium to the other. A decade on, this theatrical wizardry still feels innovative and fresh.

At its heart is still the story of two ordinary people, Laura (a beautifully controlled performance by Isabel Pollen) and Alec (a charming, Jim Sturgeon), who are brought together seemingly by fate when Laura gets a piece of grit in her eye at a railway station and on entering the platform café meets Alec, a GP, who offers help. There begins an illicit love, with an outward air of decorum and steaming passion beneath the surface.

Of course, while this couple form the central thread, their romance is only one aspect of a rich show that captivates with an on-stage band, and well-drawn romantic sub-plots that are given space to breathe, making every character feel alive and colourful.

We see the first flush of youthful romance for Beryl (Beverly Rudd) and Stanley (Jos Slovick), and unexpected passion for Myrtle (Lucy Thackeray), who had resigned herself to being hopeless in the game of love, and station master, Albert (Dean Nolan). Rather than feeling like an aside, these stories burst forward with cheek, charm and terrific comic timing from all the cast.

Composer Stu Baker weaves his music and songs throughout the action like a soundtrack, while Neil Murray’s playful set design, which at one point allows the two lovers to literally swing from the chandeliers, creates the dreamy atmosphere all romantics crave.

It’s a magical gem of a show that takes a well-loved classic and re-imagines it in glorious technicolor.