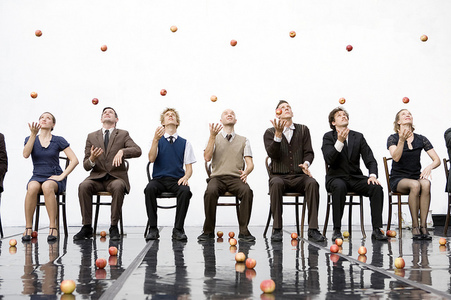 Dance: Sampled is exactly what the title suggests – a taster of different dance styles from several dance companies. It is a chance to see some of the finest dancers from across the globe for a fraction of the price and to discover new acts and styles of dance you might not otherwise come across.

It is a terrific idea. Sadler’s Wells has run a similar event successfully since 2007 and this is the second year it has partnered with The Lowry and Birmingham Hippodrome to bring an eclectic mix of pieces to one stage, in what has become an exciting day-long festival of dance.

The action inside the Lowry’s Lyric theatre at 2pm and 8pm was only part of the experience. From 10am til 10pm the building was alive with movement. Throughout the day there were opportunities to take part, including beginner’s taster sessions in tap, hip-hop, flamenco, circus, lindy-hop, salsa and ceilidh. On the plaza outside there was a bangracise class, and in the foyer, were dancers devising personalised moves to the sound of your name. In short, the whole Lowry centre was jumping.

On stage, the audience got a taste of eight different dance styles. There were short films before each act to introduce the artist and their style of dance. This worked not only to make the styles of dance more accessible, but also to give an insight into the dancers and their work.

First up was Uchenna Dance, who have performed ‘The Head Wrap Diaries’ previously in the much more intimate Lowry Studio. The section was described as ‘a bigger and bolder extract working of the show,’ and it had to be to fill a stage the size of the Lyric. That said, it lost none of the vibrancy and attitude of the sassy and often comedic full-length show.

Nafisah Baba won BBC Young Dancer of the Year 2017. The 21-year-old performed, ‘Near the Place Where Your Feet Pass By,’ the 4-minute solo she performed in the talent-show final.

From Nafisah’s contemporary, expansive movements the show moved to the tightly controlled en-pointe of classical ballet with dancers from Scottish ballet performing the grand pas de deux from ‘The Nutcracker’.

Different again was ‘Zero’, from Humanhood, a piece inspired by quantum physics. This exciting duo is back at The Lowry with a full show on 18 April 2018. The final piece in the first Act was traditional dance of another kind, the passionate and fire-footed, Jesús Carmona. Accompanied by a classical guitarist and traditional singer, he gave us a taste of what to expect from his full-length flamenco show, ‘7 Balcones’, at The Lowry later this month (26th February).

Act 2 was shorter, with three companies performing, but no less diverse in its range of styles. It started with ’60 Sec’ from Far From The Norm, an energetic mix of hip-hop and street dance. Scottish Ballet returned to the stage with ‘Sibilio’, a contemporary ballet piece for two bare-chested, male dancers.

The show ended on a playful note with Gandini Juggling’s ‘Smashed’, a mix of circus, dance and comedy, in a highly-choreographed descent into chaos, squashing any old-school thoughts of dance as high-brow entertainment.