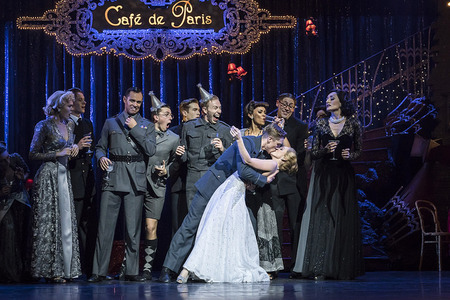 Fairy tales and war are strange bedfellows, so setting the timeless romance of Cinderella in the London Blitz of 1940, already suggests this may be a magical story, but not as we know it.

Fans of Matthew Bourne’s innovative New Adventures company have come to expect the unexpected; a winning mixture of dark reality and sparkling escapism. Yet, while it may at first seem a leftfield choice, as with all the company’s works, there is much thought, attention to detail and nods to swathes of artistic work that has gone before.

Although the original ballet was first premiered by the Bolshoi in 1946, Prokofiev wrote the score during the uncertainty and brutality of World War II. The war brought a very real sense of living for the moment, captured in the Cinderella story by the urgency of time as the clock strikes midnight. Nowhere was this escapism experienced more than in the dance-halls of every village, town and city, where couples jived to enter a different world, if just for a moment. In this sense, dance was not merely a pastime, it was essential for keeping up morale. At the same time, Fred Astaire and Ginger Rogers made the period the golden age of dance in the movies.

There are nods to all of this in Bourne’s complex weaving of history, myth and movies. The costumes, largely monochrome, are a mix of drab, utilitarian wartime clothing, service uniforms and glamorous Hollywood dresses. The largely monochrome look gives a sense of watching an old black-and-white film.

Bourne makes a special nod to Powell and Pressburger’s A Matter of Life and Death, re-imagining the Prince of the story as an injured RAF pilot, like David Niven’s character in the film. Referencing Astaire’s dancing angel, the Fairy Godmother becomes a silk-suited, guiding hand of fate. And there are glimpses of Brief Encounter in the final railway scene and Waterloo Bridge in a London Underground sequence.

Lez Brotherston’s dramatic sets are a genuine wonder in this piece, taking us on a journey through bombed tenements, glittering dance halls, lonely rooms overlooking St Paul’s Cathedral, and the danger of brawls along the Embankment.

Cinderella’s grand ball is transported to the famous Café de Paris, which was bombed on March 8, 1941, killing 34 and injuring many more. It is this incident which splits the lovers as Cinderella is taken away on a stretcher at the clock strikes 12.

There are some genuine touching moments, like when the Pilot (Will Bozier) salutes Cinderella’s father, an injured World War I veteran (Alan Vincent), as well as many scatterings of humour, such as the bizarre foot-fetish of Cinderella’s creepy step-brother (Andrew Monaghan).

It is all danced beautifully by the New Adventures’ cast, with Ashley Shaw, who originated the role of Vicky Page in Bourne’s The Red Shoes, leading as Cinderella with both delicacy and strength.

It is a visual feast, reminding us that life is never black and white, and there is always light in the dark.