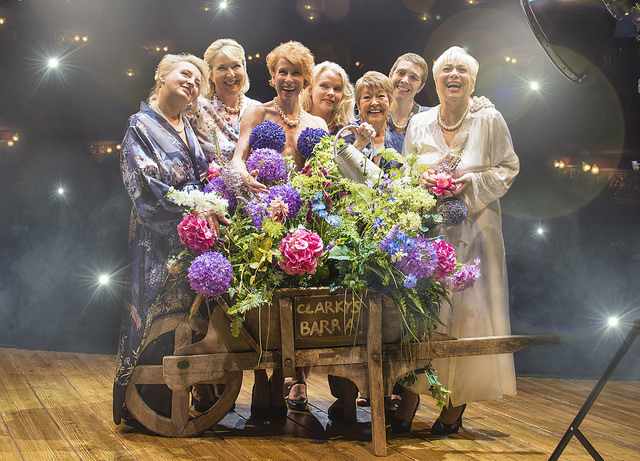 The true story of the Calendar Girls is now almost as deep a part of British culture as the Women’s Institute from which it arose.

Just like a prized WI cake competition, the drama has all the right ingredients – love, loss, friendship, community, humour and an uplifting message. Add to this Gary Barlow’s catchy tunes and may have just found the extra spice audience’s never tire of.

Judging by the cheers and spontaneous ovation at The Lowry, emotions were catching people as if hearing it for the first time. And plenty of emotions there were too. One minute we were fighting back tears the next letting them flow with laughter.

It’s a story about ordinary people doing extraordinary things, and writers, Tim Firth (who also wrote both the film and stage play version) and Gary Barlow tug on the heart-strings by keeping references to everyday things everyone can relate to, from buying margarine in Tesco to folding duvets.

The Women’s Institute in Rylstone, North Yorkshire is made up of a group of ‘respectable’ women who’ve been friends for years. They bake, knit, and have competitions to make fir cones that look like celebrities. Robert Jones design draws us into a rural idyll; a green and pleasant land of rolling hills and sunsets. It’s a picture postcard setting where life is comfortable, or at least from the outside it all looks very cosy. But as the story progresses we get a glimpse into the lives of each of the women and the private battles they each face makes the uncovered finale feel all the more triumphant.

At the centre is Annie, whose husband is diagnosed with non-Hodgkin lymphoma, a type of blood cancer, at age 53. Understudy, Ellie Leah, standing-in for Anna-Jane Casey, brings the audience along with her from the off. Her sparky personality and strong vocals capture the massive range of emotions expressed through the smallest of details. There were few dry eyes during her heart-breaking number, Kilimanjaro when she sings, “If the girl who only bakes the cakes can cope with getting wedding rings back in an envelope.” But she quickly raises our spirits again with, ‘a day will come to say, ‘Ok the sun has set, but it isn’t yet’’.

What began with Annie becomes the story of a community and Firth and Barlow illuminate the impact on the younger generation to good effect. This isn’t simply a girls night out musical; there is something here for everyone.

The UK tour has a raft of recognisable faces. Denise Welch and Fern Britton happily send themselves up and are sure-fire crowd-pleasers. Ruth Madoc gives a real attitudinal kick to her solo, ‘What Age Expects’.  If the show was a WI scone there are huge dollops of comedy cream from Sara Crowe as nervous Ruth nursing her Russian friend, and Karen Dunbar as the quirky carol singing vicar’s daughter and single mum, Cora who jokes: ‘If Jesus had teenage children the Bible would be very different.”

Musical theatre star, Rebecca Storm gives a powerful-voiced and fun performance as Annie’s friend, Chris, who comes up with the idea of the group doing a Pirelli-style calendar to raise money for a comfortable settee for the family room at the hospital where John was treated. At the time the WI doing anything so risqué was unthinkable. Today the Britishness of it all, hiding their ‘front bottoms’ as Ruth Madoc’s school teacher character, Jessie calls them, with knitting, cakes and plum jam, is still hilarious.

Here it is the finale of an emotional roller-coaster. And what a finale it is. All the cast are superb, but Karen Dunbar deserves a special mention for getting me crying laughing with her cheeky, organ playing portrait.

Like the Calendar Girls play, it’s easy to see how this show could roll on and on as a vehicle for different celebrity faces. And I’m sure I won’t be alone in thinking, I’d love to see this sunflower of a musical as another film.

Calendar Girls The Musical is at The Lowry, Salford Quays from 30 October to 10 November 2018. See website for full tour details.

Read our interview with the cast.