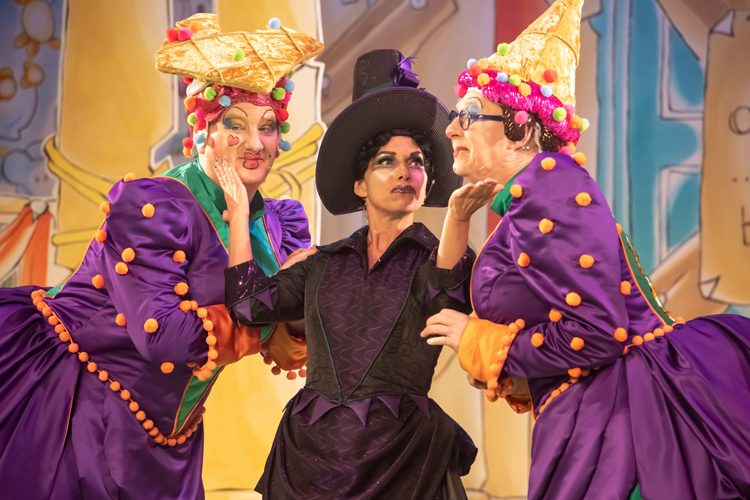 The Oldham Coliseum has set the bar high for family theatre during the festive season.

Their Christmas show is always a fun-filled, traditional pantomime. But sticking to the traditions doesn’t mean sticking to the past, and it is this fusion of old and new that Oldham does brilliantly.

So, we’ve got the traditional fairy-tale of Cinderella, who is put-down by her Step-Mother and two Ugly Sisters, but with the help of a sprinkle of magic dust from her fairy Godmother, gets to go to the Royal Ball and find her Prince Charming. There is an ear-splitting ‘It’s Behind You’, ghost scene; sweet throwing; audience participation and a full-house, sing-a-long. Men play women, women play men, there’s a big wedding, and it all ends happily-ever-after.

My 6-year-old theatre buddy finds it hilarious that the President of the United States is called Trump. Here the writers give a nod to political humour with the Ugly Sisters called, Trumpy Squeezepocket (Simeon Truby) and Pumpy Squeezepocket (Fine Time Fontayne). And you’ve guessed it – there’s a lot of loud trumping and pumping when we meet them.

Fontayne and Truby support each other well, and their double act becomes a double dame of epic proportions with twice as many outrageous costumes, crazy capers and slap-stick jokes.

Add to this mix the energy, comic timing and voice of Sue Devaney as the Wicked Stepmother and it’s a powerhouse of a trio, whose version of Beyoncé’s Single Ladies is worth the ticket price alone.

Devaney, who recently spent two years touring as Rosie (the Julie Walters part in the film) in the International tour of Mamma Mia, brings her strong musical theatre vocals to the intimate Coliseum space, and it’s a knockout. Her Wicked Stepmother, carrying a stuffed-toy Pomeranian, is a comical as she is cruel. In every aspect – character, comedy, singing, she nails it and lifts the show to another level.

Richard Fletcher, is a regular face in Oldham’s pantomimes, and is a sure winner with all the family as Buttons. This year his slap-stick, foam throwing beauty parlor scene with the two dames is hilarious, he plays a blinder of a mind-reading trick and makes a memorable entrance at the ball.

Shorelle Hepkin returns to the Coliseum’s panto for a second year, this time as Cinderella. Her transformation into Princess Crystal is magical and she brings the house down with her rendition of This is Me, from The Greatest Showman soundtrack.

There are plenty of popular references with the flossing dance, a darkly comic ‘Death is Just Around the Corner’ from The Addams Family Musical, and the ear-worm that is Pink Fong’s ‘Baby Shark’. A final party music medley leaves everyone on a high. My mini-reviewer couldn’t say which bit he liked best ‘because it was all good.’

The show opens the week co-writer and director, Kevin Shaw announced he is stepping down after 17 years as artistic director and CEO of the theatre. If this is his last Christmas show for the venue, he’s made it a cracker.
★ ★ ★ ★ ★

Cinderella is at Oldham Coliseum from 10 November to 12 January.

Read our interview with Fine Time Fontayne and Sue Devaney.