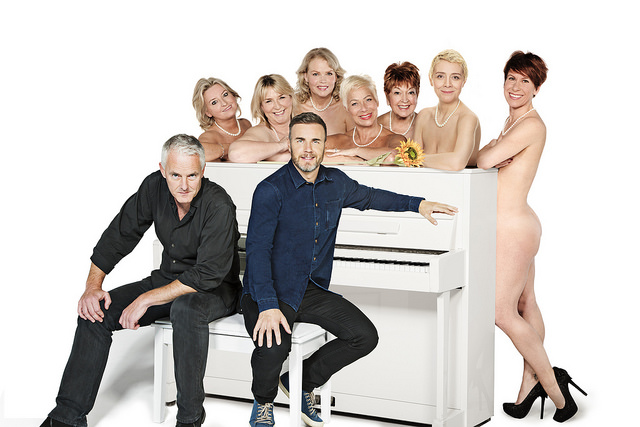 Calendar Girls the Musical. The Great British Take Off

Over a cuppa with the cast of ‘Calendar Girls the Musical’ Vicky Edwards discovers that Ruth Madoc is ‘perky,’ Fern Britton’s intuition sometimes malfunctions and Gary Barlow and Tim Firth are to musical comedy what Mary Berry is to baking.

If Calendar Girls the Musical were a cake, the recipe would read something like this:
Take an inspirational true story and add one super-talented writer, one world-famous pop star and mix their expertise thoroughly. Once you have a perfect blend of warmth, humour, poignancy and music, line a 12-inch diameter cake tin with an accomplished production team and cast in a clutch of our finest actors and singers. Lace with a sublime supporting cast and rehearse well. Garnish with a stunning set and gorgeous lights and serve to rapturous applause up and down the country.

Thrilled to be one of the girls, (but keeping her kit firmly ON – “I’m playing Marie, so no nipps or noo for me!”) presenter and best-selling novelist, Fern Britton cheerfully admits that she almost missed out, initially telling her agent that on instinct it wasn’t for her.

“And then came the call saying that Gary Barlow would like to have a cup of coffee and a chat with me!” she exclaims, eyes bright and smile wide. “Suddenly I found myself in a room reading the script, with Gary, Tim Firth [writer], the producers and the casting director. And boy am I glad that they persisted!” she laughs, admitting that her instinct must have been on the blink.

“Never was I happier to be wrong about something. Some people don’t like musicals because of all the bursting into song, but with this you hardly know that a song has started until it’s halfway through. You are totally pulled along by your earholes and the songs really advance the story. Tim Firth is a God! He wrote the play, the movie and the musical and he’s like a Yorkshire Stephen Sondheim with the lyrics. As for Gary, he has written some incredible songs,” she enthuses.

Having previously starred in the stage play version, Ruth Madoc is the old hand of the assembled cast, but she wasn’t convinced about returning to the subject.

“And then I realised that my agent had been working on it for the past six months so I thought I’d jolly well better go and do the audition!” she hoots, adding: “I expected them to want me to play Marie again, but they said they wanted me to play the older woman this time, which is wonderful; Jessie has got some fantastic lines.”

But if Fern and Ruth had reservations, you could say that Rebecca Storm was born to play the role of Chris. Literally: the West End leading lady with a career spanning four decades was been born and raised just a few miles from where the real Calendar Girls is set.

“The local relevance is extraordinary, but also David Pugh [Calendar Girls producer] was my first ever producer! In 1984 he gave me my first opportunity in the world of proper grown-up theatre in Blood Brothers.” she says, smiling at the memory.

Based on the true story, Tim Firth’s film and his subsequent award-winning play, Calendar Girls is a reworking of the award-winning and critically acclaimed The Girls, which played to packed houses in the West End last year and is now returning home to Yorkshire to kick-off a new UK & Ireland Tour.

‘It is about friendship and community and I think we all relate to that” – Denise Welch.

Loose Women’s Denise Welch stirs her tea and ponders on why the story, in various incarnations, has endured. “It is about friendship and community and I think we all relate to that. Celia, my character, has been off as an air hostess and has always been looking for something more. When she comes back she realises that it was already there. As we get older we all realise that,” she says thoughtfully.

“I think people will go away thinking about the value and the shortness of life,” says Scottish comedy actress, Karen Dunbar, who plays, Cora.

“And that positivity can come from awful situations and swing people into action,” adds Anna-Jane Casey (Annie), whose musical credits include Billy Elliot and Stepping Out.

“The power and innovation of women is amazing,” says Karen, to general agreement.

Best known as the first bride in the hit movie Four Weddings and a Funeral, Sara Crowe (playing Ruth) picks up the baton. “It is an instinctive thing to do, especially in situations that are terrible. Doing something positive becomes a survival mechanism.”

“I love men, but women make things happen,” says Denise, who confesses that while she is absolutely a woman’s woman, the first question she asked was who else was in the show. “Because I’m too old and long in the tooth to be dealing with egos and temper tantrums,” she explains. “Thankfully we all get on, but second to the script that was the most important thing to me.”

It is a show that attracts a hugely diverse audience, for sure. So why do they think that is?

“This is an incredibly human story,” Fern explains. “Life is all about loss, love, making a mess, making mistakes, clearing it up and atoning. It is a terribly hackneyed phrase, but our show is life-affirming.”

“And it is a different proposition when you have music to the extent that we have,” says the Ruth Madoc, who, as an experienced musical theatre actress, knows a thing or two about the genre. “The music expands the subject far bigger than the play ever was. It’s fabulous and audience are in for a real treat. The music makes it a wonderful emotional journey but it is seamless; it slides into the dialogue. It never feels like ‘here comes a song’, and that makes it a very powerful piece of theatre. I am really on the boil about it!” she proclaims, the Welsh lilt making her words sound appropriately musical.

Are they worried about disrobing on stage – does the ‘Great British Take Off’ hold any fear?

“We’re not prancing around like we’re in Hair!” laughs Rebecca. “And it’s done with so much comedy.”

“We’ll have great big pineapples or whatever in front of us, so the audience won’t see much,” Ruth waves any concerns aside. “Besides,” she says, a naughty glint in her eye, “at 75 you don’t care!”

Noisily chorusing that Ruth Madoc has the most fabulous boobs of them all, Anna-Jane cuts across the good-natured rabble-rousing: “It’s more of a celebration of how different everyone is.”

“As you get older you get back to who you really are and the nakedness is part of that,” says Sara.

But the show has even more to offer. Having already raised huge amounts of money through merchandise and bucket collections at each performance, the charity Bloodwise will continue to benefit from the production – a fact of which the ladies are extremely proud.

“These women did something spectacular,” says Rebecca, recalling how 20 years ago members of a small Yorkshire Women’s Institute produced a nude calendar that captured global attention and that, to date, they have raised in excess of £5 million for research. Quite something when you consider that they intended only to raise enough to buy a sofa for a hospital waiting room.

“We need that research,” says Ruth, quietly telling of the loss of a young father who died from leukaemia in her home village. “The whole village was broken-hearted. I have had bladder cancer, but I am fine now. I am a very lucky woman.”

“Perhaps nobody knew how much this man John meant to them until he was suddenly no longer there?” adds Fern. “My mum died recently and only today did I acknowledge that my landscape has changed. It can be hard to make sense of.”

What they are adamant about, however, is that this is a show that should not be missed. “It’s universally appealing,” says Karen.

“And a tribute to friendship,” Sara adds.

Discussing the tour, which takes them all over the UK, the ladies are all looking forward to seeing new places and revisiting old friends.

“I prefer touring to West End. I like the feel of companies; the family orientation that happens and that harks back to how it was when I started out 60 years ago,” says Ruth, who is going to bring her husband along for the ride. “The kids and the grandchildren will come in dribs and drabs. I’m a National Trust fan so we’ll be exploring and we will see lots of friends along the way, too.”

Salford is my home town so it will be great to be there,” says Anna-Jane. “It’s always special to play your home town.”

“For those who say that they don’t like musicals, just book! I promise that there are no jazz hands,” declares Anna-Jane.

“My hope is that people leave the theatre with massive smiles on their faces,” says Denise.

I don’t doubt they will.

Calendar Girls the Musical is at The Lowry, Salford Quays from 30 October to 10 November 2018. Read our review  at The Lowry. Visit website for full tour details.