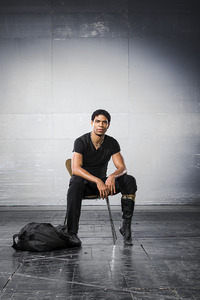 Bowing out of classical ballet at age 42, Carlos Acosta has had a long and illustrious career, the kind of which most dancers can only dream.

In this, his classical farewell, Acosta celebrates both his career and the art form which has brought him such success, gathering some of the most talented young dancers from his native Cuba for a mixed bill of 12 short ballet pieces accompanied by the Manchester Camerata chamber orchestra.

The programme is inspired by his 2006 Olivier Award winning Carlos Acosta with Guests, covering work stretching two centuries and taking us around the world, from the Highland-fling of La Sylphide to the hot Argentinian tango of A Buenos Aires. The bill also includes Cuban choreographer Raul Reinoso’s Anadromous and Acosta’s own recent choreography for Carmen.

In stark contrast to the flourishing footwork on show and the magnificence of the full orchestra, the staging is bare. This is ballet stripped back, with all the focus on the performers and the music. To have Robert Clark playing piano feels like we’re being spoiled – it is a wonderful treat.

Acosta enters the stage first in black jeans and polo shirt, his gym bag thrown casually over his shoulder. Limbering up, he’s joined by the rest of the dancers and we’re given a glimpse of how he sees himself as one of the company, relaxed backstage before the curtain falls in front of them and the show opens with Swan Lake – White Swan pas de deux act 2.

There are four ballet extracts before we see Acosta on stage again. Each is beautifully danced and whets the appetite for the main act the audience has paid to see.

Acosta plays to this anticipation, arriving on stage to the fanfare of Riccardo Drigo’s Diana & Actaeon pas de deux and Chris Davey’s warm sunrise lighting. It is a sensational entrance, leaping onto the stage in a loin-cloth, allowing the audience a glimpse of the power and strength of his muscles as they carry him through each step with apparent ease.

In part two we see another side to his artistry as the playful drunk in Jacques Brel’s Les Bourgeois. Acosta’s sense of fun shines through and this joy carries on as he’s joined by the other seven dancers in the company for the final extract, Majisimo. Choreographed by Georges Garcia to music taken from Jules Massenet’s ballet Le Cid, it was created for the National Ballet of Cuba in 1964 and gives a nod to where Acosta’s energy will now take him – establishing a touring company of his own, Acosta Danza, based in his home city of Havana, Cuba.

So, while the audience may feel a loss that this is a final farewell to classical ballet performance from Carlos Acosta, it ends with the crowd on their feet in elation. This amazing performer will certainly be missed, but he has left us celebrating life and the feeling that we’ve all been part of something special, the memory of which will stay with us forever.