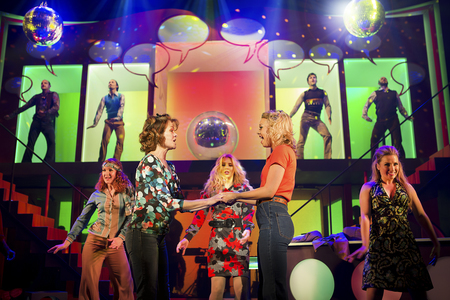 In its Seventies heyday Jackie magazine sold more than a million copies every week, to teenage girls eager to learn about fashion, beauty, pop-music, life and love.

Fast-forward 40 years and those same girls are asking the same questions, only they now wonder how life got so complicated and downright dreary. Cue the audience recognition for our heroine’s early line: ‘I work, I cry, I eat.’ The mention of her age alone – 54 – gets a cheer.

Jackie the Musical knows its target audience well and gives them everything they could ask for in a musical and some. It’s a juke box musical, along the lines of Mamma Mia, in so far as Mike James has woven a strong, emotional story around a host of Seventies hits. And judging by the audience reaction it has every chance of enjoying the same success as the ABBA favourite.

Nostalgia for the teen magazine, which ran from 1964-1993, may be selling the show but it is only the backdrop to the serious issue of middle-aged divorce.

A year after her husband John (Graham Bickley – Joey from Bread) left, Jackie (Janet Dibley – EastEnders’ Lorna Cartwright) is living among a pile of boxes, nursing her broken dreams and despairing at the wannabe pop-star ambitions of her teenage son, David.

Searching through her old belongings she comes across her old collection of Jackie magazines, up pops her teenage self (Daisy Steere) who has all the beauty and enthusiasm she feels she’s lost, and despite being baffled by mobile phones and text-messaging proves to be a voice of reason, churning out time-worn advice from popular Jackie agony aunts, Cathy and Claire.

Young Jackie, like the magazine, is supportive and informative but overall she’s fun, something her 54-year-old lost a long time ago. It’s time to get it back.

Tim Shorthall’s two-tier design with an onstage band and clever use of photo-story speech bubbles, coupled with Philip Gladwell’s neon lighting and glittering disco balls set an upbeat tone from the start.

Arlene Philips energetic choreography with a retro shimmy, injects a youthful excitement that bursts with silliness. The scene where our two would-be middle-aged lovers, Jackie and Max (EastEnders’ Dr Trueman – Nicholas Bailey) nervously navigate their first date to the soundtrack of Love is In the Air, while the ensemble dance with trees behind them is hilarious. The earnest singing of the actors coupled with the playful choreography created a ridiculousness left me crying laughing.

The former Strictly Come Dancing judge also gives some show-stopping moves to young teen, David, which actor Michael Hamway turns into a real crowd pleaser, proving that despite what his stage mum may think, he has the makings of a star and is one to watch.

There is not a weak link in this production which fizzes with fun from start to finish.