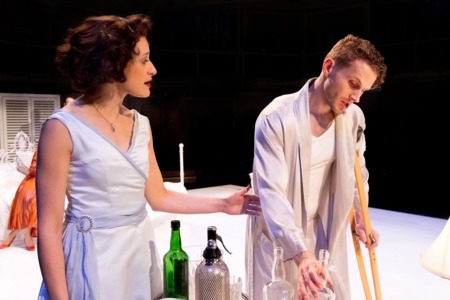 Cat on a Hot Tin Roof

Following the success of World War I drama The Accrington Pals last year, it’s good to see director James Dacre return to the Royal Exchange, this time with his equally immersive interpretation of a classic play, Tennessee Williams’ Pulitzer prize-winning Cat on a Hot Tin Roof.

It’s an ambitious production that combines the funds and work of three regional producing theatres, the Royal Exchange, the Royal and Derngate in Northampton, where Dacre is artistic director, and Northern Stage, Newcastle. And it arrives at the Exchange tightly formed, after runs at the other two venues.

The familiarity of the cast is important to the success of the play if we are to believe all of the dark secrets and intimacies of this 1950s American family. Set on the night of cotton tycoon Big Daddy’s 65th birthday, the scene should be one of celebration, but instead unravels all the pent­-up emotions of jealousy, regret, desire and avarice of each of the characters. The result isn’t a pretty sight, but Williams’ writing, while unfulfilling in many ways, is nonetheless seductive, keeping the audience hooked for a redemption that never comes.

The relationship between Maggie the Cat (Mariah Gale) and her husband, Brick (Charles Aitken) takes up much of the first act of this Deep South family drama. These are the characters played by Elizabeth Taylor and Paul Newman in the now iconic film. They are big shoes to fill, but the actors make the characters their own, and when Maggie says, ‘I’m not living with you, we occupy the same cage,’ the claustrophobia of their relationship is tangible. Neither is happy, for many complicated reasons, some of which are revealed but (as in life) never fully explained, and neither one of them will leave.

Each character hides behind layers of masks and lies, or in Brick’s case, alcohol. He is a damaged, bullying character, probably not so dissimilar to his father, Big Daddy (Daragh O’Malley), but his youthful good looks (of which Aitken has plenty) and apparent vulnerability make him more attractive, despite his obvious flaws, to both the audience and the rest of the family. In this family, everything is done to excess, highlighted in a compelling performance by Kim Criswell as Big Mama, who has big hair, big glasses, big jewellery and a big presence.

Mike Britton’s set, of unused bed, louvre blinds and stripped floors, adds to the emotional coldness: all in stark white, save for the huge sparkling chandelier that hangs between the ceiling fans. And original music by Charles Cave, of post-punk band White Lies, adds atmosphere without being intrusive. The accents are tough for both the cast and the audience to grasp, but once the ear has tuned it’s a fiery drama that brings out the dark tensions of family life and society in an unsettling and believable way.

Tennessee Williams’ Cat on a Hot Tin Roof a joint production from Royal Exchage, Royal and Derngate Northampton and Northern Stage, Newcastle is at the Royal Exchange, Manchester from 30 October to 29 November 2014.