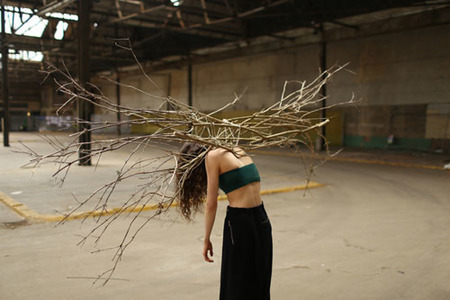 Of Land and Tongue

Although a performer for almost 20 years, Theo Clinkard’s dance company is relatively new on the contemporary dance scene. A resident artist at Greenwich Dance and an associate artist at Dance4, Clinkard established his own company in 2012, and Of Land and Tongue is the second work produced from it.

The work is two distinct pieces, Chalk, performed and choreographed by Clinkard, and Of Land and Tongue, performed by a quintet. The themes of the pieces are different, but Clinkard’s vision is clearly stamped on both, particularly his experimental use of live music, sound and audience interaction. In his explorations of dance, alongside other mediums, Clinkard has created a programme more akin to performance art than contemporary dance. Indeed the dance in both pieces is unremarkable, but the overall experience is involving and thought provoking.

The staging itself is interesting, being in the Lowry’s Compass Room, rather than one of the venue’s purpose-built theatres. It is an impressive room with floor to ceiling windows and a virtually 360-degree view across the Quays. Here it has been used as theatre in the round, or rather a taped white square in the middle of the floor, with seating on two sides. There are only two rows, numbers being restricted to 60 people per performance, and the audience is close enough to smell the perspiration of the performers as well as the sweeter scents of cut turf used as a prop, and the freshness of a celery bunch snapped under a microphone to create a sound which is synthesised for later in the performance.

Chalk appears to be the more personal piece of the two, not merely because it is the one Clinkard performs, but because it takes as its theme the chalk cliffs of his home in Beachy Head. Of Land and Tongue is the longer piece of the two and communicates a collection of words which have no equivalent in another language, for example, the early English word, Balter, which means to dance artlessly, without particular grace or skill but with extreme joy. Our final word is Japanese, yugen, which suggests beauty in the experience beyond what can be said. To express this, New Zealand dancer, Francis Christeller, beautifully leads the company in a traditional Maori love song, Pokarekare Ana, as he uses two large balls of wool to become entwined with the other dancers and audience members.

The result, at times, feels like we’re watching a workshop, particularly as some of the dancers wear loose tracksuit bottoms or long johns. Yet, as the dancers relate brief tales of their homelands, there is something genuine about the international company Clinkard has brought together that makes the piece feel less pretentious and more affecting than at first it seems.

Theo Clinkard’s Of Land and Tongue was at The Lowry on 16 November 2014.