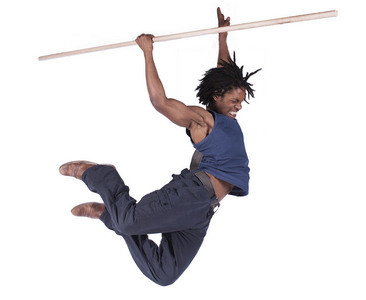 Stomp has come a long way since its 1991 premiere at the Edinburgh Festival. More than 20 years on, the show, created by Luke Cresswell and Steve McNicholas, has become a global success and its popularity doesn’t show any signs of slowing.

Part of the appeal must be its inclusiveness. An audience doesn’t need to worry that it might not understand what’s going on. The show is purely about enjoyment and finding entertainment from the most ordinary of objects.

Of course, that is not to say street dance and percussion music created from everyday objects is without skill – as the audience participation shows with comic effect. The performers in this show are highly talented and tightly choreographed, but the materials with which they work give the impression at least, that you don’t need any kind of privilege to have a go. Indeed in one piece the performers empty a black bin-liner on stage and make music from its contents, sometimes nothing more than empty cardboard cups and paper bags.

There are eight performers in this theatre production – six men and two women. They are dressed as if they could be working on any building site and the set is like a big scrap yard, built from scaffold, corrugated iron, old truck wheels and discarded signs.

The routines burst with energy, moving quickly from tapping matchboxes to playing a pedal bin like a bongo. There are dances with supermarket trolleys, huge rubber dinghies, and basketballs. Nothing is wasted, with fun being found from anything and everything – even the kitchen sink, still full of washing up.

As well as the rhythmic racket, that is surprisingly tuneful at times, there are some impressive visuals in the choreography, particular highlights being the martial art stick-fighting, and the finale bin dance, for which Stomp is best known.

It is all pulled together with a light comedy touch, and some toilet humour, which the youngsters loved. It’s wonderful to see teenagers so excited and involved in a theatre. For a half-term show you can’t beat it.