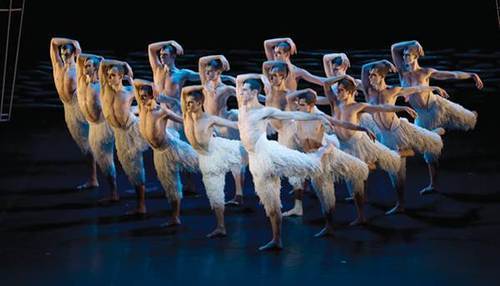 Matthew Bourne’s imaginative re-interpretation of Swan Lake has wowed audiences for the past 18 years, and this latest tour is no less spectacular.

Indeed, the show, with a young Prince being snapped by the paparazzi falling out of nightclubs, seems to have gained a fresh relevance, as has the challenge to royal protocol, comically highlighted by the nice but dim, socialite girlfriend (Kerry Biggin), who brings out the snootiness in the Queen (Madelaine Brennan) and the audience alike.

Keeping to Tchaikovsky’s score, Bourne’s vision of Swan Lake is very much a fairytale for our day, which entrances with its winning formula of colourful characters, Lez Brotherston’s surreal set and Rick Fisher’s dramatic lighting.

His bevy of male swans, which replace the traditional corps de ballet, is as striking as ever. These are not delicate creatures but powerful birds which hiss and flap. Sometimes their presence is menacing and sometimes playful, and it is always imposing, none more so than when the lead Swan, played with a detached passion and charm by Jonathan Ollivier, takes to the stage.

The Swan is a challenging and now iconic role – being the part the grown-up Billy Elliot performs on stage at the end of the film, and now the stage show. There are few dancers who could carry it off, and Jonathan is even more impressive in that he performs opposite Cheshire-born dancer Simon Williams as The Prince.

Williams is the only dancer to have danced both The Swan and The Prince. Here he is very much the soldier Prince, with short cropped hair and chiselled features. It is difficult for another dancer to appear imposing next to him, but Ollivier’s Swan manages it. It is the perfect match.

Indeed it is the skill and charisma of the two lead male dancers which keep this show at the top of its game. This is not a show which has rested on its laurels. Bourne’s Swan Lake is as escapist, humorous, dramatic and spectacular as always, which is why it is still attracting the crowds and receiving the deserved ovation it did at the Lowry.